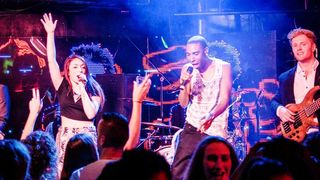 MET Music Academy is the product of an exciting collaboration between Francis Seriau, industry giant and Music Producer 'Kipper' and Fred Bolza, Vice President, Creative Group, Sony Music. Its weekend courses are designed specifically to include the needs ofboth talented musicians as well as those of the music industry.

Who's it for? If you're a talented musician with skills in Guitar - Vocals - Drums - Keys - Bass - Song Writing - Production/Programming - Music Directing,

And you want to forge important lifelong relationships, get inspired and above all, make music Your business, MET Music Academy is for you.

The focus of each weekend course is on the 4 key success factors:

And how they interconnect on a practical level and how best to leverage the multiple opportunies that each affords.

With a prestigious faculty boasting leading industry executives, musicians/artists and entrepreneurs, the Academy is underpinned by unparalleled experience in every aspect of the music industry and extensive knowledge of current and projected trends.

The quality of the content, the stimulating environment, the opportunities to progress and the long-term benefits afforded by professional mentoring, networking, live performances, feedback from experts and a comprehensive personalised game plan make MET Music Academy uniquely relevant to the needs of today's musicians

At long last talented individuals will have rare access to those with real expertise and knowledge, and be given the vital tools which will enable them to take control of their careers and to succeed both commercially as well as artistically.

Key European locations have been chosen:

And there's more in the pipeline!

If you're as interested in them, as they are in helping you, check them out:

Take advantageof the great early enrolment offer on the price page of the web site for one of their weekend intensive courses.