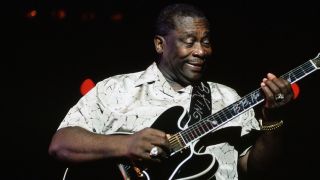 BB King, who was often called The King of the Blues, has died aged 89, it's been confirmed.

King, who began his recording career in 1949, was a hugely influential guitarist, with his instantly recognisable smooth, lyrical style style influencing whole generations of players.

He was voted the second greatest blues guitarist of all time by MusicRadar users, though many would argue that he was actually the greatest.

It's being reported that King died peacefully in his sleep at his home in Las Vegas on Thursday. We'll have more on this story soon.