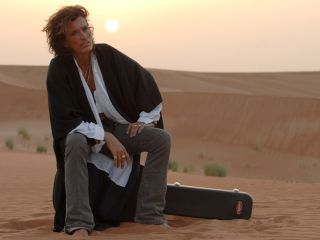 Joe Perry isn't in the desert. He just has a very big sandbox in his backyard (Image credit: Ross Halfin)

"Aerosmith are definitely not splitting up," Joe Perry tells MusicRadar, putting to rest rumors that have circulated since the Rock And Roll Hall Of Famers ended their injury-plagued summer tour prematurely.

"The band still has their best record in them," the guitarist says. "I know people say that all the time, but I firmly believe that. But it's going to take some doing to get there. Everybody's got to chill out, take a breather and then we'll have dialogues."

That neither Perry nor singer Steven Tyler have spoken in a month and a half did much to fuel breakup chatter, but Perry says, "The clock is ticking on that one. Things have to happen in due course."

Until then, Perry is busying himself with Have Guitar, Will Travel, his fifth solo album and one he recorded in a brisk 47 days. "Which just proves you don't have to spend a year in the studio dickin' around," he says. "If only Aerosmith worked as fast."

Have Guitar Will, Travel features 10 gale-force rockers, which Perry cut at The Boneyard, his state-of-the-art home studio in suburban Boston. Whereas the guitarist played most of the instruments on his last solo effort (2005's Joe Perry), the new album was more of a band affair - bassist David Hull, drummers Ben Tileston, Marty Richards, Scott Meeder and Paul Santo all contributed.

But the biggest change to The Joe Perry Project (that's what he's calling the live band once again) is the addition of Hagen, a German vocalist who Perry's wife, Billie, found on YouTube. "Who needs the classifieds anymore when you've got YouTube?" Perry jokes.

Hagen belts it out impressively on the album's first single We've Got A Long Way To Go. But does Perry, who shares vocal duties in equal measure, mind stepping out of the spotlight on what is, after all, supposed to be a 'solo' endeavor?

"Not at all," he says. "I've always played right alongside one of the best singers in rock. For me to sing half the songs on a record is enough."

Take this the right way, Joe: Have Guitar, Will Travel is the best Aerosmith record that Aerosmith haven't made in a while.

[laughs] "That's great. Thanks. I don't mind that at all. Obviously, I'm in Aerosmith, so you can't divorce me from that sound. Whether it's a solo album or an Aerosmith record, my guitar playing is my guitar playing. I'm not all of a sudden going to sound like…I don't know, Glen Campbell." [laughs]

I know you recorded this album pretty quickly. But I think that adds to its vibrancy. There's an urgency that is lacking in a lot of records nowadays.

"Well, you just hit the nail on the head. More than anything, this record is supposed to serve as the soundtrack to a live show. I intend to take the Joe Perry Project on the road and tour and tour and tour until Steven and I get things back on track and Aerosmith are ready to make music again."

I'm going to ask you about Aerosmith in a second, but tell me what's it like to write on your own? Are songs a struggle or do they come easily? And what about lyrics - because traditionally, Steven would write the lyrics.

"I'm a late bloomer as a wordsmith. Steven has always been the lyricist in Aerosmith and he's spent a lot of time crafting a particular style and figuring out what is going to work with his voice. With me, it's more of an immediate thing; I write what pops in my head.

"But I have been spending a bit more time on words and messages, thinking of themes. A lot of the album deals with relationships, and I guess I'm really talking to my wife in a lot of the songs. Lyric writing is a great way to say something to somebody without having to actually say it in person." [laughs]

"As far as writing music on my own and coming up with riffs, I've been at it a while. I'm always flattered when people say such-and-such riff is the greatest of all time, but you gotta get over that hump and say to yourself, 'OK, I wrote a pretty good riff today. I've still got better ones in me.' And that's what I try to do."

"One thing that helps is listening to a lot of newer bands and realizing there's no limit to the way you can mix up three chords. I hear a guy like Jack White, and man, what he does is so cool. He's inspired by the same guys I was, but he puts his own twist on it. That's a nice kick in the pants for me. That helps to keep me fresh."

You said that you write lyrics that pop into your head. Still, do you make allowances for your voice? Do you change words to fit your style of singing?

"Oh, sure. You have to. Some guys can write anything and be able to sing it, but I'm not one of those guys. [laughs] I can't compete with the classic lead singers out there, so I write songs that fit my range - which is limited, but I still have…how would you say it?"

I'm curious as to why you felt you needed another singer. Did you want to go back to the vibe of the original Joe Perry Project, where you traded vocals with other singers?

"Pretty much, yeah. I can do the more bluesy, Jim Morrison-meets-Tom Waits singing, and Hagen can do all the hard stuff. [laughs] I think it works. Finding Hagen was amazing. He fits right in and he's a terrific guy. We're going to do a good long tour and I'm already thinking of doing the next record with him."

That's a switch from the last time we spoke. I remember earlier this year you expressed some irritation that the new Aerosmith record wasn't finished. I would think you'd be chomping at the bit to get Aerosmith back in the studio.

"I am irritated the new Aerosmith album isn't done. I wish the tour we just did - and that certainly didn't turn out the way I had hoped - was to back up a new record. I don't want do go out and play the same songs over and over again, although maybe some people only want us to do that.

"It's hard to say when we're going to get Aerosmith going again. Would I like it to be now? Absolutely. But it might be six months from now. I don't think it'll be until early next year, but I'm an eternal optimist."

"I've never had a tour like this one where…everything just keeps going wrong. Postponing gigs is one thing, but cancelling them altogether, that just sucks for everybody. Most of all, it's bad for the fans. They're at the top of the list of people getting hurt. We owe our fans much more than that.

"Right now, though, I think we have to let the dust settle. There's been such a bad vibe about Aerosmith lately, all this stuff written in the press, and I understand that - we let people down. What we need to do is take six months, maybe a year and come back as strong as we can be.

"Everybody has to get healthy and feel ready to make music again. No halfhearted efforts, no barely getting to it. I don't want a record half finished and then we go on tour. That will never happen again.

Have you and Steven spoken yet?

[pause] "The clock is still ticking on that one. We'll get there. Things have to happen in their due course. Who calls who first…it'll happen. You know, keeping a band together is a ridiculous process. We have five guys who have been together for 40 years. You and I both know that most marriages don't last half that long."

And you guys did split up once before...

"That's right. But it's because of that that we realize how fragile everything is. Bands are breakable. They can be crushed from the inside as well as from out. There's a chemistry to having a great band. It doesn't always work, but we're old enough to know we have to give one another some space."

Let's go back to your solo album. I really like your cover of [original Fleetwood Mac member] Jeremy Spencer's Somebody's Gonna Get (Their Head Kick In Tonight). Did you record that live? It sure sounds like it.

"Thanks. I'm glad you like it. We did record it live. We jammed on it about five times and chose the best take. I was set up in the control room so I could play and still produce, and the rest of the band was in the studio - but we could all see each other and work off one another. The energy and sound on that track is my tribute to Gene Vincent. If Elvis was the polished diamond of rock 'n' roll, Gene Vincent was the brass knuckles." [laughs]

You have so many guitars. Was it a problem deciding which ones to use on the album?

"It has been in the past when I'm dealing with different tunings. The more complex you make things, the more decisions you have to make. With this record and tour, I wanted it to be down-and-dirty, so I limited my options.

"My main guitars were my 'Billie' guitar, which Gibson made for me. That's the BB King 'Lucille' guitar that has my wife's picture on it, hence it's called 'Billie.'

"Then I pulled out my old Joe Perry Project Frankenstrat. It's basically a right handed-Telecaster neck and a left-handed Strat body with Barcus-Berry pickups. It sounds better than it should. You can't find those pickups anywhere - I've been looking around for years.

"Plus, I used some of my Gibson signature model Les Pauls, and I used my '59 sunburst Les Paul. Oh - and I used an Epiphone Casino, a mid-'60s model. There might have been a few more, but those are the ones that come to mind."

Well, you do have 600 guitars, so you're forgiven if you can't remember them all.

"I would say it's a blessing and a curse, but that wouldn't be true. It's all a blessing. You start going through your guitars and you discover something you haven't played in a while. It always makes you feel like a kid on Christmas morning."