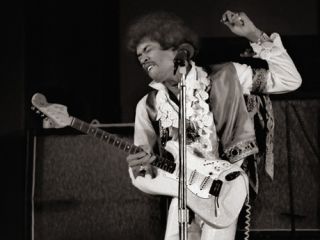 The other day, we reported that OutKast rapper Andre 3000 had been cast to portray Jimi Hendrix in a biopic called All Is By My Side. John Ridley, whose writing credits include Three Kings, U Turn and Red Tails, will be directing from his own script.

The film, which will lens in a few weeks in Ireland, is said to take place in England in 1966-67, during the time that Hendrix recorded his icon debut album, Are You Experienced. But if the producers are planning to feature Hendrix's original compositions in the picture, they still have some work to do. And perhaps some prayers are in order.

Yesterday, a statement was issued by the Jimi Hendrix Estate, which reads:

"Various media outlets have recently published accounts that indicate a feature-length Jimi Hendrix biographical film is nearing production. Experience Hendrix, LLC, the family-owned company entrusted with safeguarding the legacy of Jimi Hendrix and administrator of the Jimi Hendrix music and publishing catalog has made it known many times in the past that no such film, were it to include original music or copyrights created by Jimi Hendrix, can be undertaken without its full participation.

"Experience Hendrix CEO Janie Hendrix, sister of Jimi Hendrix, and the EH board have not ruled out a 'biopic' in the future though producing partners would, out of necessity, have to involve the company from the inception of any such film project if it is to include original Jimi Hendrix music or compositions."

On the 1967 US release of Are You Experienced, Hendrix's version of Billy Roberts' Hey Joe was included. Whether the producers of the film have obtained rights to that song isn't yet known - as of this writing, they have yet to respond to the Hendrix Estate statement.