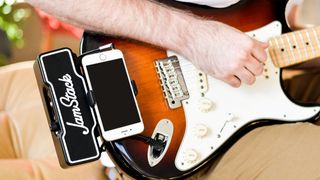 The JamStack promises to handle high- and low-volume playing.

Compact guitar amps are nothing new, nor are guitars with built-in speakers - but an attachable amp that works with just about any existing guitar? That's a world-first according to Canada's JamStack team, who hope to revolutionise guitar-playing on the move.

Recently launched on Kickstarter, the JamStack is a 10-watt speaker that integrates with phone apps via a 1/4" to 1/8" jack (or Lightning connector for iPhone 7), which also sends signal to the amp.

That means guitarists and bassists can use the likes of AmpliTube on the move, with the phone attached to the guitar, too, via an included smartphone mount.

The JamStack's strap-pin spring load system ensures the amp fits on most guitar designs (apart from Flying Vs) and the whole system weighs less than 900g.

An onboard rechargeable battery gives players eight hours of charge, and the amp also doubles up as a portable Bluetooth speaker for practising and jamming. Looks like a headphone jack's included, too.