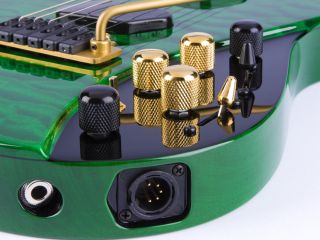 When Moog indicated that it was planning to release a guitar on April 1, many people - MusicRadar included - wondered if it was a wind-up. However, it turns out that the instrument is very real indeed: it´s just been announced that it will be shown to the public for the first time in Nashville on June 20.

Although Moog is best-known for its classic hardware synths, we should make it clear that the Moog Guitar is not primarily a technology-driven product. It´s not a guitar synth, it´s not a MIDI guitar and it´s not an effects processor; in the words of Moog Music President Mike Adams, it´s “a fantastic axe designed to be played by the best musicians in the world”.

The Moog Guitar range will be launched with the limited Edition Paul Vo Collector Edition model. This is a AAAAA maple top guitar with a mahogany body, an ebony finger board and a Wilkinson bridge. Vo is the man responsible for inventing the Moog Guitar, and each of his signature instruments will ship with a Certificate of Authenticity.

So, the Moog Guitar is just a standard six-string? Not quite - this being a Moog product, there is some electronic wizardry at work.

You can play the Moog Guitar in one of three modes: Sustain, Mute and Controlled Sustain. The first of these promises to give you infinite sustain on every string and at every fret position; Mute is designed for staccato playing, as it removes energy from the strings; and Controlled Sustain sustains the notes being played while muting those that aren´t.

This sounds similar to the technology used by Fernandes in its Sustainer products, though Moog is claiming that what it´s offering is unique.

The new guitar is also notable for its harmonic blending - this comes into play when you move the mute/sustain functionality between the neck and bridge pickups - and a built-in Moog ladder filter. Both of these features are controlled using the included expression pedal.

Following its June 20 premiere, the Moog Guitar will be demoed to the media at the Summer NAMM show in Nashville on June 21. We're not sure when the instrument will actually be released, but given that the Paul Vo model costs $6,495/£4,000, you'd better start saving now if you want one.

Check out the Moog website for more, including a video.