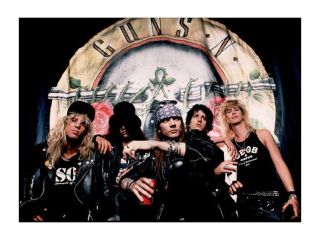 We're back! Well, maybe. And probably not all of us

Hanna Montana will be retiring to Vegas by the time Axl Rose gets around to releasing Chinese Democracy (a title some other band should just go ahead and use already, please). But in the meantime, Rose's chances of joining Guns N' Roses - of rejoining the real Guns N' Roses, that is - got a little better this week.

From the Well, Nobody Saw That Coming, Did They? Department, the bickering Velvet Revolver have imploded - or, at the very least, got one Revolver lighter. In a tersely worded statement titled "Velvet Revolver to Part Ways with Singer," four of its members - guitarist Slash, bassist Duff McKagan, drummer Matt Sorum, and second guitarist Dave Kushner - gave singer Scott Weiland the ol' heave-ho. Citing Weiland's "increasingly erratic" behaviour as one of the reasons for his dismissal, Slash was quoted as saying that the band was "all about its fans and its music, and Scott Weiland isn't 100 percent committed to either. Among other things, his increasingly erratic on-stage behavior and personal problems have forced us to move on."

When it comes to moving on, however, Weiland beat his ex-band members to the punch by earilier announcing that he would rejoin his ex-ex-band, Stone Temple Pilots, for a summer tour. In a rebuttal statement to Velvet Revolver, Weiland had the following to say: "After reading the comment by Duff, Matt, Dave and the illustrious 'Guitar Hero,' Saul Hudson, a.k.a. Slash, I find it humorous that the so-called four 'founding members' of Velvet Revolver, better known to themselves as 'The Project' before I officially named the band, would decide to move on without me after I had already claimed the group dead in the water on March 20 in Glasgow."

Okay, so everyone's a tad grouchy. Their feathers are a wee bit ruffled. Still, the big winner in all of this could very well be Axl Rose. The erstwhile singer recently hired big-time uber-manager Irving Azoff to look after Guns N' Roses, and if you're going to have to fork over 15 percent of your income to some big-time uber-manager, why not make sure that other 85 percent actually means something? The fact that Azoff knows a thing or two about putting warring bands back together again, e.g., The Eagles, is either a major freaking coincidence or an act of supreme prescience on Rose's part. Time will tell.

Of course, when it comes to time and Axl Rose...well, just remember: Hanna Montana in Vegas.