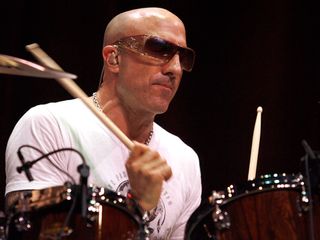 Superstar drummer Kenny Aronoff will fill in for Chad Smith in Chickenfoot on their world tour. © Sayre Berman/Corbis

Is Kenny Aronoff the hardest-working man in show business? Could be. Between touring with John Fogerty, the ace sticksman is constantly in demand for sessions, drum clinics and TV appearances. Now you can add to his bursting schedule playing with the all-star lineup of Sammy Hagar, Joe Satriani and Michael Anthony, otherwise known as Chickenfoot.

With the group's de facto drummer, Chad Smith, committed to his 'day job,' the Red Hot Chili Peppers, Aronoff has been tapped to keep Smith's throne warm when the Foot hits the road later this year.

MusicRadar caught up with Aronoff in Las Vegas the other day to talk about how he came to join the Chickenfoot fold and the preparations he's making before their world tour.

You and Chickenfoot - how did this come about?

"It started during their first tour, really. I got a phone call from one of the band's managers, Carter, who unfortunately passed away this year, asking if I might be available to play a show with Chickenfoot. It was kind of urgent, because Chad injured his bicep and it was looking like he might miss a show. They needed somebody who could do the gig and who could be ready fast.

"Usually, when I do a show, I write out the songs and really prepare - that's just how I am. I told Carter I'd have to cancel some gigs, but yeah, I could do it if they needed me. As it turned, out, Chad was fine and played the show. But that's how my involvement with Chickenfoot started."

So you got another call this year to fill in for Chad, then?

"Well, now we get to this year. It was in May, and I was playing a couple of shows in the wine country. I ran into Mick Brigden, who now manages Chickenfoot on his own, and he told me that the band had just finished a new record. The only problem was that Chad was going to be touring with the Chili Peppers right at the same time that Chickenfoot would be going out.

"Mick asked me if I'd be interested in doing something in Chad's absence. 'Absolutely!' I told him. He mentioned it to the guys, and they said, 'Sure, let's bring Kenny up.'

"I learned the first album, wrote out the parts - and let me tell you, Chad played brilliantly on that stuff; he's so great. So I started doing my Kenny Aronoff stuff to it, getting inside the music, all that. There's a lot going on in Chickenfoot's music, accents here and there, choruses changing up - the songs are very exciting for a musician to play. I'm writing these parts out and learning the tunes while I'm on tour in Europe with John Fogerty.

"Then Sammy called me up, and you know, he's all about vibe. We talked about how great Chad is, and then I told him that I could totally relate to the music. To play with Chickenfoot, I told him, would be like being John Bonham and Kenny Aronoff and Mitch Mitchell all rolled into one. See, I grew up playing rock 'n' roll, R&B, jazz - I understand improvising but still keeping the form. I was into it."

"Sammy said, 'No, I know you can play, but we gotta get the right vibe.' So I went to Sammy's place to jam with the band. We got in the room and played through the 12 songs I had memorized, and after we were done, they said, 'Let's do some other ones,' and that's when I had to refer to my notes.

"Then I found out that they booked me to film the video to Big Foot with them the next day! [laughs] I was like, 'OK…' So we're filming the video, and in-between takes we started jamming. Instantly, we were on fire, and that's when they decided, 'All right, this is gonna work!' See, in most auditions you don't walk in and go off and start jamming - you'll never get the gig. But that's what Chickenfoot wanted; they wanted a guy who could hunker down with them."

"Yeah. We realized that we could be a band when we got down to real jamming. And the great thing is, this is all cool with Chad. Chad and I are great friends, and he's totally behind me doing this. We're one big happy family. He's the real drummer for Chickenfoot; I'm the visitor."

How long are you slated to play with Chickenfoot?

"I'll play with them until Chad comes back. He'll be out with the Chili Peppers through 2012, so I'm in for as long as I'm needed. I'm still playing with John Fogerty, too. We can make everything work."

"Oh yeah. I'll be doing those. Those shows will be killer."

In interpreting what Chad played on the Chickenfoot records, how much are you staying true to his parts, and how much of your own licks are you putting in?

"Oh, I'm playing a lot of what Chad did. The guys have encouraged me to stretch out as much as possible, so I do. The thing is, Chad is the one who picked me, and I get it. His attitude was, 'Kenny is like me. He hits hard, he's kind of crazy, so he's the best possible replacement for me.' He told the band that. I play close to his style even though I do bring my own thing to it."

"He's fucking awesome! What a bass player. And his singing? Forget about it. This guy can sing anything. He's unreal. But his bass playing, the way he holds it all together - eighth notes, sixteenth notes, all these cool lines - and we're both feeding off of Joe, who's an encyclopedia of music. Joe lays down this incredible bed of music. The whole thing is amazing.

"And then there's Sammy, who puts so much emotion into his singing. He knows rhythm, he knows dynamics. The way he leads the charge is incredible. I'll tell you, there are no weak links in this bunch. Everybody is operating on an extremely high level."

Are you changing your kit around in any way to play with Chickenfoot?

"A little. I added a China cymbal, and I took my little rack tom off and put a ride cymbal right over the bass drum. See, I play a double hi-hat - I have a traditional hi-hat and a cable hi-hat to my right.

"I call it 'the Bermuda Triangle,' having a ride, crash and hi-hat right over my floor tom. The sticks get caught up and go flying all over. So moving the ride right over the kick drum fixes that. I tried it at soundcheck and then for this webcast performance that we just did, and it was great. I found myself using different muscles in my forearm."

Is playing a high-energy Chickenfoot set going to be different than playing with John Fogerty?

"No, not at all. John Fogerty is two hours and 28 songs - it's relentless! [laughs] John doesn't let up, man. He's a very high-energy performer. I'm in such shape from playing with John, so this will be fine. I'm really looking forward to it."

Last question: Have Sammy Hagar and Michael Anthony offered to shave their heads to blend in with you and Joe?

[laughs] "It's been talked about. We joke about it. But I'll tell you, it ain't gonna happen. That's one photo nobody will ever see."