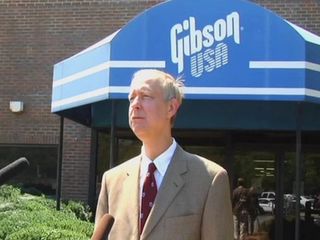 The US Department of Justice announced today (6 August) that the Gibson Guitar Corporation has entered into an agreement to resolve the investigation into whether the company used illegally harvested wood and ebony, thereby violating the Lacey Act.

Under the agreement, Gibson will pay a $300,000 penalty, plus a $50,000 donation to the National Fish and Wildlife Foundation to help promote conservation of protected trees.

In addition, according to a press release issued by the Department of Justice, "Gibson will also implement a compliance program designed to strengthen its compliance controls and procedures. In related civil forfeiture actions, Gibson will withdraw its claims to the wood seized in the course of the criminal investigation, including Madagascar ebony from shipments with a total invoice value of $261,844.

"In light of Gibson's acknowledgement of its conduct, its duties under the Lacey Act, and its promised cooperation and remedial actions, the government will decline charging Gibson criminally in connection with Gibson's order, purchase, or importation of ebony from Madagascar and ebony and rosewood from India, provided that Gibson fully carries out its obligations under the agreement, and commits no future violations of law, including Lacey Act violations."

"As a result of this investigation and criminal enforcement agreement, Gibson has acknowledged that it failed to act on information that the Madagascar ebony it was purchasing may have violated laws intended to limit overharvesting and conserve valuable wood species from Madagascar, a country which has been severely impacted by deforestation," said Assistant Attorney General Moreno. "Gibson has ceased acquisitions of wood species from Madagascar and recognizes its duty under the US Lacey Act to guard against the acquisition of wood of illegal origin by verifying the circumstances of its harvest and export, which is good for American business and American consumers."

Today's settlement effectively ends a dispute between the Justice Department and Gibson, one which resulted in two raids of Gibson's Nashville and Memphis facilities.

"The Department of Justice is committed to enforcing the laws enacted by Congress," said US Jerry Attorney Martin. "Failure to do so harms those who play by the rules and follow the law. This criminal enforcement agreement goes a long way in demonstrating the government's commitment to protecting the world's natural resources. The agreement is fair and just in that it assesses serious penalties for Gibson's behavior while allowing Gibson to continue to focus on the business of making guitars."

During the yearlong investigation, Gibson CEO Henry Juszkiewicz maintained that the company was innocent of any wrongdoing. In a August 2011 press conference, he stated, "We feel totally abused. We believe the arrogance of federal power is impacting me personally, our company personally, and the employees in Tennessee - and it's just plain wrong."

Responding to the agreement today, Juszkiewicz said, "We felt compelled to settle as the costs of proving our case at trial would have cost millions of dollars and taken a very long time to resolve. This allows us to get back to the business of making guitars. An important part of the settlement is that we are getting back the materials seized in a second armed raid on our factories and we have formal acknowledgement that we can continue to source rosewood and ebony fingerboards from India, as we have done for many decades."