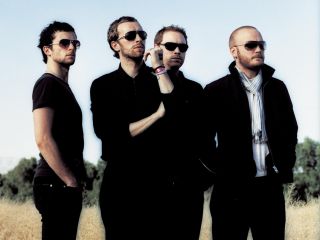 Drummer Will Champion sings it live (he's the bald one)

Last month, Coldplay marked the release of fourth album Viva La Vida Or Death And All His Friends with a free download of Violet Hill. The registration process of which crashed the entire internet. Cheers for that. Now, to celebrate the beginning of the Viva La Vida Tour, they're giving away another freebie: Death Will Never Conquer.

A message posted yesterday on the bands website reads: "Tonight's the first night of our tour. To say thank you to everyone who's bought tickets and supported us, here's a new song called Death Will Never Conquer. You'll hear it at the concerts with a twist…"

The song itself, a minute-long blues ditty, sounds like a cross between Down In The River To Pray and Let It Snow. The twist (if you don't want to spoil the surprise) is that drummer Will Champion sings it live.

At the time of writing, the internet is still ticking over so you might want to download it while you can…