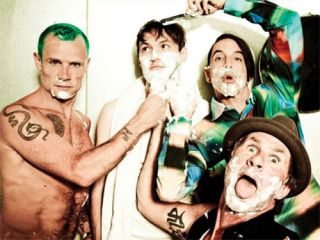 Following a recent playback of the new Red Hot Chili Peppers album I'm With You in Santa Monica, Red Bulletin magazine sat down with Flea and new guitarist Josh Klinghoffer to gain an insight into the collective psyche of one of the planet's biggest bands.

In the five years since Stadium Arcadium, the group have survived the loss of guitarist and creative lynchpin John Frusciante and returned from a hiatus that many fans feared would spell the death of the band.

Indeed, there were times when even Flea didn't feel like he had the energy for it anymore: "I considered it," admits the bass dynamo, "But I've considered it a million times, so there's nothing new.

"At the end of the last tour, things felt very strained. And I said, 'Let's just take two years off.' Because things just felt unpleasant, and not too functional - even though I was very pleased with the art that we were making, I thought we needed to get away from one another."

He adds, "I also think that we had been pushed together so intensely by all the work we were doing for so many years. So we all got away from it for a long while, and did other things.

"But I still thought that if John left the band, there was no way we would go on without him because John was such a big part of this band and of our writing process. He wrote a lot of the principal parts of many of our biggest songs."

Josh Klinghoffer was unveiled as Frusciante's replacement in early 2010, following previous live appearances with the group as a supporting musician and a résumé that includes Beck and PJ Harvey and also collaborations with Frusciante himself. So how is the new boy settling in?

"It's a lot different from John," says Flea. "John was a virtuoso guitar hero type of player and probably the best guitarist in the world. Josh is a completely different kind of musician, he plays a lot of different instruments. Josh is an all-around talent. He plays guitar, he sings, he plays drums - so he's a real musical guy.

"He's the kind of subtle player who creeps up on you rather than wowing you right away, and you sit back and see what he does grow into something gorgeous. Josh is also a great writer, and he wrote great stuff for this album. So Josh brought something very different for us."

For Klinghoffer, it seems that the transition from sideman to full-time band member has been enviably smooth thus far: "It hasn't gotten weird yet," says the 31-year-old. "Being in the studio and writing songs hasn't been weird in the least. How will it be when I step onstage with them? I don't think it's going to be any different."