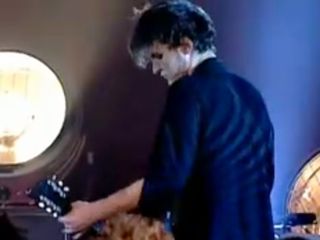 Josh Klinghoffer is a Pepper. So where's the official word?

The Red Hot Chili Peppers made their first public performance with their new guitarist Josh Klinghoffer at the MusicCares Person Of The Year dinner honoring Neil Young last Friday night in Los Angeles.

As MusicRadar previously reported, Klinghoffer started working with the band in the fall following the apparent departure of guitarist John Frusciante. (Days later, Frusciante confirmed his split from the group on his website.)

The Red Hot Chili Peppers still haven't made an official statement as to Frusciante's exit (it's the second time he's quit), nor have they commented on Klinghoffer joining the band.

As seen in the video below, they kept things low key the other night, sauntering on stage to play Neil Young's classic A Man Needs A Maid, with no announcement of any kind as to Klinghoffer being a new member.