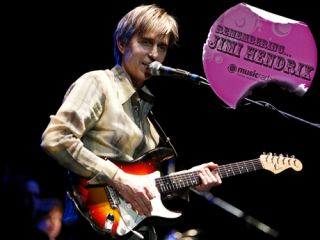 "Back in the '60s, music and movies were kind of the same: things would happen in the big cities and then they would spread across the country. Austin isn't a small city, of course, but it isn't like New York or LA or Chicago - we were behind the times by a week or a month or so in those days. A lot of the times, it took a while for us to get albums in our local record stores, even big hit records.

"I was already playing the guitar, but I hadn't heard a thing about Jimi Hendrix or The Jimi Hendrix Experience or anything like that. But a friend of mine had been to New York City, and he came back with this album called Are You Experienced. He put it on, and I remember thinking, Wow, this is good. But at the same time, it was so crazy and far-out that I didn't know what to make of it.

"You have to understand, my world at the time was pretty centered around drinking Dr Pepper and being into surf music. I was getting into people like Albert King and Freddie King, along with John Mayall And The Bluesbreakers and The Yardbirds with Jeff Beck, but I was totally unprepared for listening to something like Third Stone From The Sun.

"Nobody had done anything like what Jimi Hendrix was doing. Hearing him was like seeing a new color or tasting a new food - you don't have a frame of reference, really, but you know you mind has been altered in some incredible way.

"To be honest, I didn't even know if he was playing the guitar. I was like, Is he playing some sort of other instrument that no one's told me about? How's he getting these sounds? It all sounded so foreign compared to what everybody else was doing.

"Actually, the copy of the album my friend had said, 'With the assistance of Mitch Mitchell on drums and Noel Redding on guitar.' So I saw this guy Jimi Hendrix in the middle of the photograph and I thought that he had to be the bass player and singer, you know? How could somebody be so amazing on the guitar and sing like that? It wasn't until later that I found out he was the guitar player in the band, which totally floored me.

"I was blown away by the feedback and fuzz and all that, but then I started to get into Jimi's overall musicality. Once the shock and the 'oh wow!' factor wore off, I realized what a consummate artist he was. That's what impressed me, his total artistic vision; that his guitar playing, while brilliant, was never gratuitous but was part of the whole deal. Jimi was always about the song, the album, the statement, the mood.

"Also, what really impressed me was that every recording of Jimi's offered something new - a chord, a production technique, a certain way of looking at things. He didn't repeat himself; he wasn't just changing album to album, he was changing song to song.

"I remember the day Jimi died so clearly. I was in eleventh grade, and school let out and I walked out the door, and a friend of mine, Mike Taylor, came running up to me going, 'Did you hear the news? Did you hear the news? Jimi Hendrix just died!' He was older than me, and he literally came to the school to tell me. I was pretty crushed, because at the point, I was so into music, and Jimi was such a torchbearer, in the same way that The Beatles were."

"It's funny: When I listen to The Beatles or Jimi Hendrix, I feel as though they knew they had to steer the wheel. They had the weight of the world on their shoulders, and for the most part that was okay… until they couldn't take it anymore.

"What's interesting about Hendrix is that even though he was such an amazing guitarist, his music would have mattered even if there wasn't one guitar solo at all. I'm spellbound by the 3D quality of the music itself. I would love it even if he played rhythm guitar and didn't play one solo. I know that probably comes as a surprise to a lot of people, but it's true. He was such a beautiful writer and producer and arranger, just a total musical visionary.

"Being a part of the Experience Hendrix tours has been amazing for me, and I can't wait to do the next one. To hear all of these different people offer their take on Jimi's music has been pretty incredible. And I love to look out and see so many young people in the audience. This isn't like an oldies tour or anything like that. It's totally current. Jimi Hendrix is as 'now' as he's ever been. I suspect he always will be."

Eric Johnson is a Grammy Award-winning musician who has topped numerous guitar polls over the years. His newest album, Up Close, will be released soon.