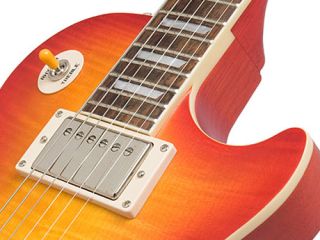 PRESS RELEASE: Most guitar historians and collectors consider the 1959 Les Paul Standard, the "holy grail" of Les Paul's - not to mention of all electric guitars. Although the only significant change made in that year was to flatter, wider frets that allowed more dramatic bends, the impact of that change was not truly realized until the 1960's when countless rock and blues players discovered the magical fat, warm voice and feel of the Les Paul Standard.

To commemorate this classic instrument, Epiphone introduces the new Limited Edition "1959" Les Paul Standard. With a history going back to the 1940's when Les Paul himself would visit the Epiphone factory in New York and work on what has come to be known as the FIRST electric guitar, this Limited Edition also pays homage to the man that started it all.

Epiphone's Les Paul Standard has been a favorite guitar for years and years. Starting with the same successful recipe, Epiphone significantly "steps it up" on this Limited Edition "1959" reissue. True to it's heritage, the neck features an authentic, 1950's rounded neck profile. Often referred to as "the baseball bat", this neck feels beefy yet comfortable in your hands while adding warmth and sustain with it's greater mass.

Epiphone hand fits this solid Mahogany neck into the body with an historically accurate "deep-set" long neck tenon that extends well into the neck pickup cavity creating even more tone and sustain. As is traditional with Les Paul Standards, the back of the body is solid Mahogany while the top is a carved Hard Maple cap. Making it affordable, a premium AAA grade flame Maple veneer is attached capturing the true "beauty of the burst."

Capturing everything these tone woods and premium construction have to give are a pair of Gibson U.S.A. BurstBucker (TM) pickups. BurstBucker pickups replicate the sound of Gibson's original "Patent Applied For" pickups - the pickups that gave the '59 Les Paul Standard its legendary sound. Like the originals, with unpolished magnets and non-potted coils, variations in pickup output and tone also came from inconsistencies in winding the bobbins, a result of the lack of automatic shutoffs on Gibson's winding machines in the late 1950s.

Seth Lover, who invented the humbucker, always said they wound the bobbins "until they were full." When two coils in a pickup have a different number of turns, that variation puts a little "edge" or "bite" on the classic humbucker sound. That's the sound BurstBuckers replicate. The neck pickup is a Burstbucker-3 and is wound in the range of Gibson's '57 Classic. The bridge pickup is a Burstbucker-3 and is slightly over-wound with a hotter output that works well in combination with the BB-2 in the neck. One listen and you'll think you have a 1959 in your hands!

Other unique features of this "1959" include a Switchcraft (tm) brand toggle switch, Mallory-150 tone capacitors, amber "top hat" knobs with metal pointers, nickel hardware, a blank trussrod cover and a "stamped" serial number on the back of the headstock. To top it all off, the guitar includes a replica Lifton-style case with brown exterior and pink interior. Very cool!

It also includes a certificate of authenticity as well as Epiphone's Limited Lifetime Warranty and 24/7/365 Customer Service. If you don't have the wallet for a real "1959" or want a professional instrument that you can perform with night after night, this complete package is for you. But hurry. Quantities are limited to 1,959 total.