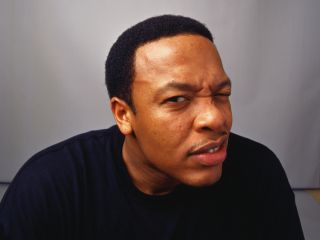 Dre's on the mix, but not yet on the mic (Image credit: David Barry/Corbis)

The 10-year-gestation of Dr Dre's Detox album seems no closer to ending. And now, a new leak of a track has Ludacris rapping the part of Dre.

Previous leaks have had TI pretending to be be Dre who, one assumes, will eventually cut the lyrics that others are writing for him.

"With 30 mil sold, where's the fucking gratitude? / I'm much more than 6-4's / Gun talk, weed smoke and sick hoes / That's why most of them have come and went / I just recoup, recreate and reinvent".

Oookay, but this is Ludacris pretending to be Dre boasting about being Dre, isn't it? Which is making the Detox project increasingly surreal.

Ludacris later tweeted: "It was fun trying [to sound like Dre]".

When Dre gets around to recording words, we can only hope he shows some "f***ing gratitude" to his ghostwriters. Listen to OG's Theme below.