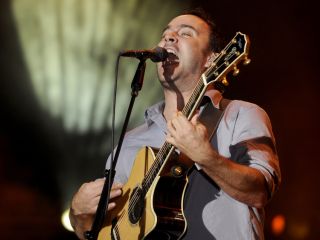 Matthews has been a long-time player of Taylor instruments (Image credit: Tim Mosenfelder/Corbis)

As the lead singer, songwriter, and acoustic guitar savant of the Dave Matthews Band, Matthews' deft ability to elicit intricate melodies from his Taylor 914ce has endeared his compositions to legions of fans around the world.

To share his passion for playing and to capture his own signature style and tone, Taylor Guitars, in collaboration with Matthews, is releasing the Dave Matthews Signature Model (DMSM) guitar.

The DMSM is based on Matthews' "number one guitar," the Taylor 914ce, a model he says "has a really genuine, wonderful acoustic sound" and "is consistent...and on top of that, the guitar itself is really beautiful. I'll just go to it no matter what."

Crafted from a back and sides of Indian rosewood, topped with Sitka spruce, the DMSM is complemented with abalone inlays, derived from Matthews' own hand-sketched designs, to honor his late bandmate and friend, saxophonist LeRoi Moore. On the ebony fretboard at the 12th fret, a crown with one of its tips partially missing notes Moore's absence from the band.

In another of Matthews' touches, a rendering of the word "Grux," a nickname of Moore's which is also honored in the band's latest album, Big Whiskey and the GrooGrux King, is inlaid between the 13th and 18th frets. Matthews also contributed a twisting, vine-like design to the ebony peghead.

To sonically inspire, the DMSM features Taylor's proprietary CV bracing with a tone-enhancing relief rout and comes stage-ready with the Expression System® for pure acoustic amplification.

Premium appointments include Ivoroid binding on the body, fretboard, and peghead, a bone nut and saddle, Gotoh 510 antique gold tuners, as well as an interior label and certificate of authenticity personally signed by Matthews.

The Dave Matthews Signature Model joins many of the Taylor guitars already in Matthews' collection, including the 914ce, 856ce, 714ce,and W65. The new guitar is now available at authorized domestic and international Taylor dealers at a suggested retail price of $5,428.