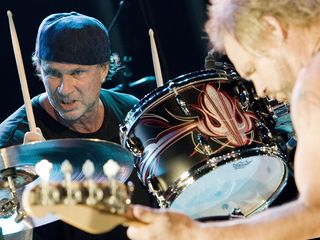 Seated in his cozy backstage area, Chad Smith yanks off his shoes and socks and spreads his feet out on a coffee table. "Look at this," he says, wiggling pinkish-tinged toes. "I've got some sort of rash or something. I don't know if it's a drummer's thing, athlete's foot or what it could be. Between my feet, bashing up my hands last night and this bruise I've got on my knee, I don't know if I'll be able to play tonight."

He chuckles, putting his socks and shoes back on. The Chickenfoot drummer, who also spends part of his time pounding the skins for a little-known band called the Red Hot Chili Peppers, can already hear the roar of the crowd below. "You know, they seem like good people," he says. "What the hell, I think I'll play!"

We're in Cabo San Lucas, Mexico, where Chad the rest of Chickenfoot - guitarist Joe Satriani, singer Sammy Hagar and bassist Michael Anthony - are set to rock out for a big webcast bash to commemorate the 20th anniversary of the Cabo Wabo Cantina, Hagar's mega-successful nightspot. The band has already pulled off two spectacular "rehearsal shows," their first gigs since last December. "Tonight will be the ultimate," says Smith, "if I can just stop injuring myself."

Smith admits that doing double duty in two bands - triple duty in three, if you count his instrumental side project The Bombastic Meatbats - sometimes gives him the feeling that he's experiencing a multiple personality disorder, but he says the camaraderie in Chickenfoot is a godsend.

"I guess you could say we come running back to this band to get away from a lot of the other noise in our lives," he says. "Don't get me wrong, our day jobs are cool - well, those of us that have them; nobody knows what Mike does during his off-hours." He laughs and continues: "But there's something about being in the Foot that feels so right. We let off a lot of steam in this band, and we're thankful for that outlet."

Just then, a stagehand pops his head in and tells Smith, "20 minutes." With that, the drummer leaps up and starts to shake out his body. "I gotta loosen up, get in my zone," he says. "The Chickenfoot zone - that's a scary place for most people."

On that note, MusicRadar decided it was a good time to ask Smith about the next Chickenfoot album, as well the status of the Chili Peppers.

You just might qualify for being the hardest working man in show business at the moment, Chad. How do you keep your various musical duties straight?

"You're assuming I do, which is mighty nice of you, Joe. [laughs] No, it's fine, actually. What I do is no different from what a lot of musicians do, session players and what not, and especially drummers. You play music with these guys one day, you play with these other guys on another day…It's all good. So far, the Foot has worked."

Earlier, Joe Satriani was telling me about how he'd like to see the next Chickenfoot album differ from the first one. What are your thoughts?

That's not fair! You tell me your thoughts, man.

[laughs] "I'm just kidding with you. [pauses] I think the first album reflected the energy of four guys getting together and playing live and enjoying being around one another. That's all great, and that's what you need in a band. But for the next one...I'd like to see a little more crafting of the music, which I think is happening.

"We have four songs that we've been jamming on at Sammy's place. One is kind of Zeppelin-y. And then there's this other really cool song called Come Closer that Joe wrote on piano but he's now playing on guitar -"

Joe was telling me about that one.

"Oh, so you are going to tell me what me said! See, I knew I could get it out of you. [laughs] Then Sammy's got a song that I'd call kind of Humble Pie-ish - a very happening number, I think. So we're on our way. Some of these songs might fall by the wayside, but they're starting points. We're at a really cool place now."

About the song Come Closer, Joe said something that really struck me, that he felt it could present a side of Sammy that people haven't seen or heard before - more introspective.

"I'd agree with that. You know, we've all heard Sammy over the years doing his thing. Face it: he's a larger-than-life guy, and that's what lead singers are supposed to be. But I think he's definitely capable of growing in the context of this band, of...yeah, showing more personal sides. We offer him a wide canvas. Whatever he wants to do can definitely work. That's the great thing about Chickenfoot: it's one giant stew of creativity. [laughs] How's that for poetry?"

It's not bad. So even though Chickenfoot have been writing and demoing, the plan is to record in the fall, once you're done with the Chili Peppers album?

"That's right. The next Chickenfoot record is gonna kick ass, but at the moment, as you can imagine, my main focus is on the Chili Peppers. I'm definitely in Chili Peppers mode."

You're getting set to make the record soon, right?

"Real soon. Since last October we've been working on things, and probably in a few weeks we'll be going into the studio with Rick Rubin. Pre-production will take a few months, but I'd say by July we'll be laying down real tracks. We have a lot of material, probably about 20 songs."

Has everything calmed down in the band? There was so much attention to John Frusciante leaving again - understandably so.

"Yeah, things have calmed down. Things were…as you know...they were a little pressurized last year. We were sad to see John leave the band, but he has to do what he wants and follow his path."

How has Josh Klinghoffer been working out?

"We're all thrilled to have Josh be part of the group now. He's been a friend of ours for a long time. He's played with us, he's played with John - he's a real natural fit.

"Josh is a real creative force. He's going to play guitar, he's going to write music, he's going to sing and play keyboards. The guy is amazing. And the great thing is, we didn't have to go through that whole dating phase that happens sometimes and winds up weird. It's not like we held these open auditions and got in somebody who we had to figure out. We know what Josh can do and we're excited."

But still, it's going to be a different sound with Josh.

"Oh, sure. I mean, he's his own man, he's a different guy. There's little nuances and things about his playing that are going to be different, but like I said, he knows the band and we know him. We were already starting from a good point. I think people are going to really like what we do.

"And aside from what Josh is bringing to the band, Flea is doing different things. He's contributing a lot of piano-type songs. You know, he recently went to school, to USC, and he really learned a lot about theory and playing. If you grow, everybody grows - if they're open to it, which we are."

What have the other members of the Chili Peppers said to you about Chickenfoot? Do they like the band?

"You know what's funny? They haven't said anything. No, wait, I take that back...Flea did ask me once what it was like playing with Michael Anthony. That's about it."

"We don't really talk about our extra-curricular activities. I mean, I went to see Flea play in his Thom Yorke project. I enjoyed it, but I don't sit around asking him about it."

Before you have to go, let's talk about the new Chickenfoot DVD.

"Yes. Chickenfoot: Get Your Buzz On Live!"

It's a great set. The live show is terrific, and the documentary is hilarious. I really loved your little segment in which you play a man-on-the-street-type reporter.

"Yeah, we thought it'd be cool to have me go around to people and ask them if they knew the name Chickenfoot and if they could identify the members. I'm standing there with this big photo of us and only one guy knew who we were."

"Nahhh. People don't know bands the way they used to. They don't know the names of albums or songs. You saw what the one person said to me - she knew songs on her iPod by the numbers, not the actual titles!"

But perhaps the most important thing is, people still think you're Will Ferrell...

Buy Chickenfoot: Get Your Buzz On Live on DVD and Blu-Ray here: Amazon, HMV