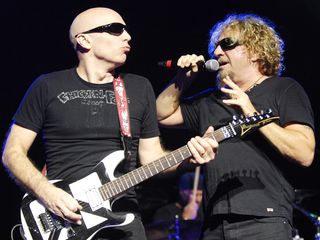 Joe Satriani smiles a beatific smile. The guitarist is in Cabo San Lucas, Mexico, to play his first shows with Chickenfoot since last December, and after a couple of downright kick-ass sets over the past two evenings - "rehearsal gigs," he calls them - Satch is pumped for an even bigger blow-out tonight.

"It was a little nerve-wracking at first," he admits. "There might have been a few wrong notes, but maybe you didn't hear them because we were so loud. You know, we were playing so great together last year, so I was a tad nervous that it might take us a while to find our groove again.

"But we fell into being a band again pretty quickly," he continues. "We have a very intuitive thing going on between us. We feel very lucky, and we've got a lot to celebrate."

Celebration is the order of the day - or night - here in Cabo. Not only are Chickenfoot - the supergroup that also includes vocalist Sammy Hagar, bassist Michael Anthony and Red Hot Chili Peppers drummer Chad Smith - helping to commemorate the 20th anniversary of Hagar's Cabo Wabo Cantina, which has become, over the past two decades, the de rigueur hang for South of the Border rockers and partygoers of all stripes, but they're also trumpeting their just-released DC3 DVD and Blu-ray release, Chickenfoot: Get Your Buzz On Live.

In addition to a complete concert filmed with 16 hi-definition cameras, the Daniel Catullo-directed DVD features an hour-long documentary that is, as one might expect, unpredictable and hilarious. (Check out a promo trailer here.)

Each Chickenfooter gets his own segment in the doc, ranging from Hagar popping in on The Dead's Bob Weir to ask him when he last dropped acid (Bob isn't exactly sure, although he thinks it was recently); Anthony taking a playful, although slightly painful, ribbing from comedian Adam Corolla; and Smith ambushing pedestrians in man-on-the-street reporter-mode, asking them if they've ever heard of Chickenfoot and can name the group's members (most can't).

As for Satch, he spends some quality time with Spinal Tap's legendary guitarist Nigel Tufnel (Christopher Guest), for an interview that Satriani calls "truly remarkable. When you're granted an audience with Nigel Tufnel, well, as you can imagine, it's every guitarist's dream."

With several hours to go before soundcheck, Satriani talked to MusicRadar about the future of Chickenfoot, expressing enthusiasm about a recent group writing session ("already I can tell we're going deeper than on the first album"). He also reveals that fans can count on a new solo record in the fall.

After decompressing for a few months and playing on the Experience Hendrix Tour, what was it like to get back with Chickenfoot to work on some new material?

"Better and easier than you might think. It doesn't take long for us to start clicking. We got together and worked on some ideas. Actually, we had a bunch of stuff we recorded on the road last year, little bits of things. But we have four songs that are really taking shape. We're going to take a little more time with this record - well, we kind of have to given our schedules."

By that, you're referring to Chad and the Chili Peppers - they're getting ready to start their new record.

"That's true. Out of all of us, Chad probably has the toughest schedule right now, balancing two bands. But we made it work last time, so we'll figure something out."

Of course, last time he was on a real break from the Peppers. Now he's literally going to be jumping from band to band.

"It's a lot of jumping, but I know he'll make it work. We're all determined to keep this thing going. We might not always have Chad available as often as we'd like, but we'll get this next record done. I think people can definitely expect a new Chickenfoot record in 2011. We'll start recording in earnest right after he's done with the Chili Peppers album, which will be in the fall."

Can you tell me a little about the direction of the new songs?

"A few are big-time rockers, which we love to play. But we do have something that's quite different and I'm pretty excited about it. For the first time I wrote a song to Sammy's lyrics."

You've never done that before?

"No. Usually songs start out with us jamming or I'll come in with riffs. But this time I took some of Sammy's words and I sat down at the piano and wrote to them."

It's going to be a piano-based song?

"No, I transposed it to guitar, but by writing it out on the piano it gave me a different kind of structure and harmonic sense. It's a song called Come Closer, and I think it's going to be pretty spectacular. I want to get a different side of Sammy here. Normally, you know, he goes for the big statements, the big choruses..."

He gets the crowd going.

"Right. But there's another whole aspect to Sammy Hagar that people haven't heard, a more intimate, introspective side. These lyrics reflect that, and they definitely inspired music from me right away. The next Chickenfoot record is going to be great. When we made the first one, we were just coming together. Now we really know one another, so we can take things wide. I can't wait to get started."

But before you do that, I understand you're going to do a new solo record. Don't you rest, man?

[laughs] "I do, but probably not like other people. I'm going to start the next record soon, as in a few weeks from now. Since I got off the Hendrix tour, I've been going through a lot of the bits and pieces and riffs I've collected, trying to see if they're songs. I probably have about 30 actual song ideas, so now I have to whittle them down a bit."

Who are the musicians you're going to use?

"Mike Fraser's going to co-produce it with me. As for the band, I'm going to work with Jeff Campitelli on drums and Allen Whitman on bass. Allen's in a band called The Mermen. Jeff, Allen and I have a long history together. Back when Jeff and I were in The Squares together, Allen was in a few different Bay Area bands, so we'd always be doing shows together. As a bassist, he's got great feel, a very unusual style, so I'm really looking forward to working with him."

What can you tell me about the new songs?

"One thing I'm really trying to do is explore new rhythms. There's going to be a wide variety of textures and moods, and some of them might be kind of obscure. It's not going to be so much [mimes playing fast] 'da-da-da-da-da-da.' I'm not saying there won't be a fast song on the record, but I feel like it's time to get into some different areas. I don't want to rule anything out, but that's where my head is at."

Finally, let's talk about the Chickenfoot DVD. It must have been great to be interviewed by Nigel Tufnel.

[laughs] "What guitarist wouldn't want that? His gifts to the world are many. Actually, Christopher Guest and I have a bit of a history: I had a tiny role in his movie For Your Consideration - I played a guitarist, which was a real stretch. [laughs] But he also showed up as Nigel Tufnel in my DVD The Satch Tapes.

"Yeah, so it was a real treat to have him interview me as Nigel in the Chickenfoot DVD. The strange thing is, when you're working with Christopher - well, Nigel, I mean - you can't try to be funny. You have to be led by him and be the straight man. That's the only way something like that can work."

Check back with MusicRadar tomorrow for our interview with Chad Smith. In addition to discussing the next Chickenfoot record, Smith gives us the exclusive lowdown on the Red Hot Chili Peppers' new sound.

Buy Chickenfoot Get Your Buzz On Live on DVD and Blu-ray here: Amazon, HMV