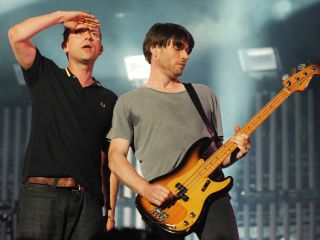 Blur's triumphant summer gigs could be the end of the band. Alex James says there are no plans for the quartet to get back into the studio.

Despite encouraging comments recently made by guitarist Graham Coxon, bassist James said they have not talked about "doing anything else whatsoever".

Over recent weeks, Blur played a series of concerts including ones at London's Hyde Park and Glastonbury Festival.

"That was what we said we'd do and we did it and it was great," said James. "It hasn't been mentioned the idea of doing anything else but hey, it was great."

"I've spent the last week staring at a bonfire muttering to myself. I haven't been able to contain the joy that it brought to all of us. [Glastonbury] was very, very emotional. Everything we hoped it would be and more.

"What was amazing was the band's and the audiences' connection. Best gig we've ever done. Amazing."

Graham Coxon is currently touring his solo album The Spinning Top. Damon Albarn is playing with Africa Express in Paris in August, while James - now a farmer - has recently signed a deal to produce cheese for the Prince Of Wales' estate.

"It will be the poshest cheese in the world," claims James.

Here is Blur's The Universal from this summer.