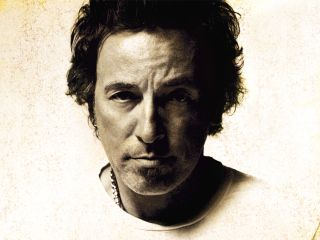 Bruce Springsteen, the 'Boss' of Glastonbury 2009

It's now confirmed that Bruce Springsteen will play Glastonbury 2009, topping the bill on the Saturday night.

The veteran American rocker, who recently released his 24th album Working On A Dream, will play the coveted Saturday slot filled by rapper Jay-Z in 2008.

"He's one of the all-time rock legends and I'm confident that this will be one of our best shows ever," Glastonbury festival founder Michael Eavis said.

All this is great for Springsteen fans, but if Blur and Neil Young are confirmed (as expected) for the other two mainstage headline slots, this makes for an unusually old lineup.

The average age of the greying, balding headliners at Glastonbury 2009 will be... 55.

Where are all the "young dudes"?

While there's no doubt that Springsteen has recorded plenty of hits to get a field jumping, it has to be asked whether Glastonbury's organisers have had something of a volte-face?

In 2008, they claimed Jay-Z was booked to headline the Saturday - highly-successfully, in the end - as they wanted to appeal to a younger audience.

Jay-Z himself is no teenager - he was 38 when he headlined last year. But at least he's a 'hit' artist.

Blur (the original-now-reformed lineup) haven't released any music for nearly a decade. Springsteen regularly has Number 1 albums still, but even his crowd-pleasers on Glastonbury's Saturday night are going to pretty old. Streets Of Philadelphia (1994) is a hardly a festival-ready anthem. Dancing In The Dark may be? That's from 25 years ago. Meanwhile, Born To Run is now 33 years old.

(Never has the phrase "keep on rockin'" sounded so moribund. UK TV watchers will be thinking of Tommy Saxondale already…)

But don't expect to experience the exuberance of youth. Just 40-60 years olds punching the air like Jay-Z never happened…

Glastonbury's mainstage headliners are only a small part of the festival picture of course, but I can't help thinking this is a huge disappointment for many who've already bought tickets.

Let us know who are the young bands who SHOULD be given centre-stage.

Meanwhile, I'll see you down the front for Fairport Convention. They're playing on Sunday, apparently…