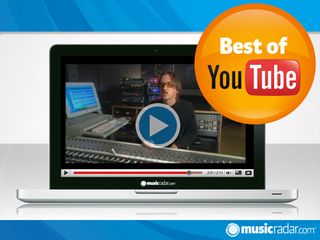 Steel Panther - Death To All But Metal (NSFW)

After Bad News, Spinal Tap and Tenacious D, does the world need another parody metal band? "Hell yeah" say LA's Steel Panther. WARNING: the lyrics are offensive and the clothes criminal - as is the point. But you will laugh. If only once. And if nothing else, Steel Panther raise the bar for parody band musicianship, if you like ripping solos. After all, these guys were playing this kinda stuff 'for real' in the '80s. Enter the Steel Panther guitar soloing contest here. Michael Leonard

Let's Wrestle - We Are The Men You'll Grow To Love Soon

The Dead Weather make a record

With the Sony Walkman celebrating its 30th birthday this week,Jack White and co take us back to an even older school where music is consumed via spinning discs of of black vinyl. The thoroughly awesome closing track Will There Be Enough Water? from The Dead Weather's Horehound LP provides the soundtrack to footage captured at the United Record Pressing plant. For more grainy black and white footage of the busiest man in music today, check this. Chris Vinnicombe

Butch Vig chose Nevermind as one of his career-defining records. "No shit," I hear you say. Obviousness aside, here's Butch behind the console, deconstructing the vocals and lead guitar layers of Smells Like Teen Spirit. Tom Porter

La Roux's recent 'admission' that her music has '80s influences goes down as one of the most needless statements of 2009, but even at a time when synth-loving female singers are all over the charts, her sound is distinctive. Latest single Bulletproof currently sits at number 1 in the UK - here she is performing it in BBC Radio 1's Live Lounge. Ben Rogerson

A fascinating set of videos in which different instruments are hit or strummed, as seen through the eye of an ultra-high-speed camera. Above is crash cymbal; there's also a snare drum and an electric guitar. And as a non-music bonus, here's a guy getting smashed in the face with a water balloon - slowly. Chris Wickett