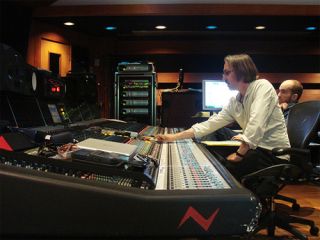 Having divided his career between the drum kit and the control room, Garbage sticksman and production legend Butch Vig boasts a glorious discography of rock.

Here, Butch Vig chooses the six albums that most defined his career, and tells Rhythm Magazine how he bottled the drum sounds on each.

It started as a routine production job for three Seattle musicians with an underground buzz. But when Butch Vig and Nirvana finished at Sound City Studios, they were armed with the album of the decade.

"A combination of things made the drums sound so good on Nevermind. Mostly, it was Dave Grohl. Kurt [Cobain] had told me they'd just got the best fucking drummer ever, and when I came out to rehearsals, I was blown away by how hard he hit."

"It was recorded in Sound City, California, which is basically a big open room. We used a drum tunnel on the kick, where you take another bass drum, extend out the regular bass drum and put the mic further away, which I often do to get more boom."

"But the set-up was really nothing fancy. It was the player and the room that made that record sound so special."

In the wake of Nevermind, Vig was the most respected producer on the planet. As his phone rang off the hook, he hit the Magic Shop in New York city to tame the rough edges of mid-period Sonic Youth.

"It's important to understand how a drummer plays - do they hit the cymbals loud, or do they play the fills louder than the groove? Steve Shelley is amazing in the way he fits into the symphonic sound that Sonic Youth make. Often, he'll play drums more as a pulse than a clearly defined part. He glues it all together."

"Dirty was recorded on an old radio broadcast console, and cut in a smaller room, where we tracked a lot of things live with the band playing in a circle round Steve's kit. Again, a simple set-up."

"Over the years, I've found that the fewer mics you use, the better the sound is going to be."

The 4,000,000 sales of the Pumpkins' finest hour were hard-earned, as Vig found himself contending with the narcotic excess and sporadic brilliance of SP's sticksman Jimmy Chamberlin.

"Jimmy was unpredictable. Sometimes he didn't show, or he'd be too fucked-up to perform. I remember threatening that I was going to play the drum parts, although there was no way I could have played like him. When he was sober, his performances were incredible."

"It's one of the most ambitious-sounding records I've ever produced, and a lot of that is down to Jimmy's 'push-pull' feel. He has unbelievable dynamics, so I was able to use really good condenser mics on the snare and toms. Sometimes he'd explode into rock, and sometimes he'd be playing little grace notes on the snare, often all in the same performance, so I had to make sure the mics were able to capture all that."

Vig's debut album with his own band was his chance to push the envelope - resulting in a futuristic drum sound that was equal parts man and machine.

"Garbage was us screwing around and not adhering to what a proper drum sound should be like. I'd just bought my first sampler and was listening to Public Enemy, so I wanted to take that into a rock context, using live drums as well as programming, loops and processing.

"Because it was me, people expected it to sound like a grunge band - then they heard Queer or Stupid Girl, and [the sound] was obviously totally different. Did I mind being sidelined by a drum machine? No - it was quite liberating."

"In some ways it makes it easier when you're the drummer and the producer."

As the Californian rockers came of age in 2003, Vig took up residence at LA's Cello Studios to bottle their new-found maturity. It was an experience he remembers as "a whole new ball game."

"I fell in love with AFI when I saw them live, and Adam Carson and I bonded early on. He wanted to make an ambitious-sounding record. On their earlier records, the drums are kind of lo-fi , and AFI were getting more ambitious in terms of their writing.

"We never used any click tracks - I'd just start a click to give him a reference, then take it out of the mix so he could play dynamically the way he wanted. I'm really proud of the way that record sounds - it has a natural ebb and flow."

"Their music has intense dynamics and that's one of the things we really captured."

Struggling to recreate his electronic wizardry on the live circuit, this 2005 Garbage effort found Vig stripping back the drum sound with the help of a very special guest.

"Bleed Like Me is more like what we do live. I didn't play drums much on it - I wanted to be in the control room where I had more input into the vibe."

"The toughest track to record was Bad Boyfriend. Initially I didn't like how the drums felt, until I ran into Dave Grohl at a party and it was like 'dude - you gotta play on it'. He played it faster, and when it came to the break he was like 'Shall I go for it?', then he started playing these Keith Moon fills. Ironically, I then had to figure out his part - which was a bitch!"

Liked this? Then try:
Kings Of Leon on MusicRadar: videos, lessons and gear
100 greatest drum beats of all time
How to sound like Led Zeppelin's John Bonham