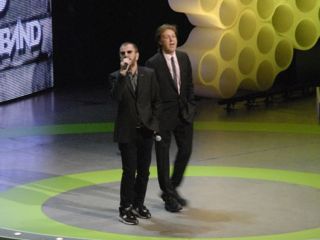 Ringo and Paul launch The Beatles: Rock Band at E3

Sir Paul McCartney and Ringo Starr, along with Yoko Ono Lennon and Olivia Harrison, got together today in Los Angeles at the E3 Electronic Entertainment Expo to officially announce new information about their upcoming The Beatles: Rock Band videogame due for release 9 September.

"The game is good. The graphics are very good, and, er, we were great," said Starr.

"We never thought we'd end up as androids," McCartney added. "Thank you very much for having us on your game show."

Among the details disclosed were 10 of the 45 songs expected in game: I Saw Her Standing There, I Want To Hold Your Hand, I Feel Fine, Taxman, Day Tripper, Back In The USSR, I Am The Walrus, Octopus's Garden, Here Comes The Sun and Get Back.

In other words, not too shabby.

I Saw Her Standing There - The Cavern Club

Different venues played by The Beatles will be recreated for The Beatles: Rock Band, including The Cavern Club in Liverpool (where they got their start), The Ed Sullivan Show, Shea Stadium and The Budokan in Japan.

I Want To Hold Your Hand - The Ed Sullivan Show

The game will take fans into the studio experience after the band stopped touring through "artistic visual expressions known as Dreamscapes, intended to transport players to the imaginative environments that capture the essence of The Beatles' genre-busting musical and fashion transformations during their later years," according to a release given to attendees at E3.

Additionally, it was revealed that the entire Abbey Road album will be available for purchase and download, as will other tracks from the band's catalog, after the game's release.

Up on the roof for Get Back - the last live performance

Want more? Well, it was also announced that All You Need Is Love will be released exclusively for Xbox 360 users as a downloadable song the day the game hits retail shelves. The proceeds of the single will be donated to Doctors Without Boarders.

In the video below, a complete demonstration of the game is offered by a 'house band' that performed a spot-on version of Day Tripper.

Giles Martin, son of Beatles producer George Martin, said that he was reworking songs from the original multi-track masters. He promised gamers would eavesdrop on never-before-heard studio chat from John, Paul, George and Ringo.

Check out the extraordinary trailer for The Beatles: Rock Band below.