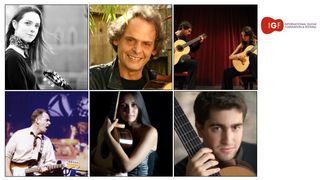 Bath Guitar Festival (19-25 July 2013) celebrates 20 years of wonderful guitar events around the city. The guitar is unique in its appeal to people of all ages, musical tastes and economic means; no instrument is as accessible and versatile as the guitar, come and be thrilled by our concerts in every style. In classical we celebrate Julian Bream's 80th birthday and Benjamin Britten's centenary with performances and a new commission by Errollyn Wallen.

The guitar is the most popular instrument in the world and is celebrated in its mesmerising variety at this festival: from living folk traditions to thrilling notated compositions: from acoustic historical instruments to the cigar-box guitar. This Bath Guitar Festival seeks to promote the range of guitar culture for everyone.

Future subscribers also get 25% off gig tickets at Bath Guitar Festival. Email bathguitarfestival@futurenet.com and quote your subscriber number to claim your discount code.

Visit the official Bath Guitar Festival website for the full 2013 programme of events.