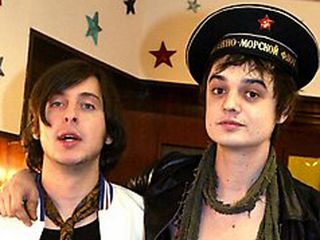 Barat and Doherty back in business?

Whereas Barat only recently said that he was "too busy" with Dirty Pretty Things to even consider a Libertines reunion, now he's saying he has "unfinished business" with Doherty, and that he would enjoy it if the two could rekindle the relationship they had in their previous band. Asked about his appearance at Pete Doherty's Hackney Empire gig in 2007, where he joined his former bandmate on stage, Barat said, "It reminded me how great we were together and how much unfinished business there is.

"As to whether The Libertinescould reform, it's a big 'maybe,'" he continued. "It's a question that follows me around constantly. Some school kid will ask, 'When are you getting back together?' I'm thinking, Do you really think this is something I haven't given a lot of thought to? I miss the purity of what me and Pete had together when we started out. It would be great to have that back.. Pete always used to say, 'Imagine the songs we still have to write.' That thought is always with me."

The Libertines broke up in 2004 after a tumultuous 7-year run, during which time their record releases and concert appearances were in a perpetual state of peril due to Doherty's drug use.