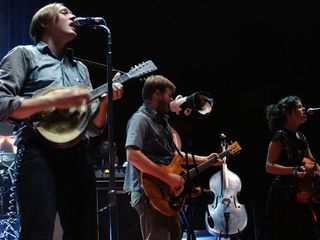 Win Butler, Tim Kingsbury, and Regine Chassagne of Arcade Fire are going to 'The Suburbs.' Or something like that (Image credit: Tim Mosenfelder/Corbis)

Arcade Fire posted a banner on their website yesterday that read "Arcade Fire Presents 'The Suburbs'" - which, of course, had many speculating that this was a reference to the Montreal-based band's next album.

Almost as quickly as that banner appeared, however, it was altered and now just reads "Arcade Fire Presents." Underneath is a list of tour dates, which includes two UK appearances at the Reading & Leeds Festivals (Friday, 27 August for Leeds; Saturday, 28 August for Reading).

So whatever the band is presenting isn't entirely clear. While it might concern their upcoming third album, the banner could also be a teaser about a short film director Spike Jonze is working on with the group. (Jonze used a new version of the band's song Wake Up in the trailer to his 2009 big-screen adaptation of Where The Wild Things Are.)

In other Arcade Fire news, it seems as that same song helped to inspire The Roots and John Legend to create an album of '60s and '70s socially conscious soul covers.

Talking to Rolling Stone, The Roots' ?uestlove explained that the idea was to originally remake Wake Up. Ironically, that song isn't making the final cut, though it will be the name of the album. Eschewing the big hits route, the disc will feature lesser-known tracks by artists such as Marvin Gaye, Roberta Flack, Nina Simone and Donny Hathaway.