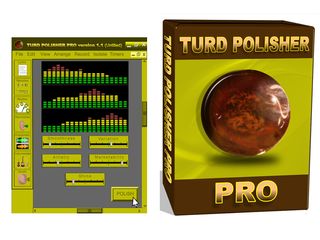 The Turd Polisher Pro GUI and its tasteful packaging.

The laughs come thick and fast on 1 April. No, really. Music-making gear manufacturers, software companies, bands and even festival organisers are all trying to yank your chain on this, the day of All Fools, but MusicRadar is here to keep you wise to all the japery.

Here are the best (worst?) April Fool's Day stunts we think are being pulled in 2010. Let us know if you find more…

Cheekily, The Moog Guitar was unveiled on 1 April 2008, leading many to (wrongly) conclude that it was a wind-up. We're not buying this one, though: any box that's designed to restore a T-Pain style vocal to its "complete original character" has to arouse suspicion. And presets with names like 'Drunk as a Sailor' and 'Where did all the green room beer go?' Sorry, we're not having that.

While some April Fools are so subtle that you have to read them a couple of times just to make sure they're not real, The Sound Guy has given the game away immediately with that name. This 'new product' is a "song rewriting and finalizing program" that can make any old rubbish sound great.

3. Coldplay launch their own fragrance

The self-deprecating four-piece have launched Angst, a new scent that comes in Brian Eno-designed bottles and contains "sangre, sudor and lágrimas, all of which have been sourced from Fairtrade suppliers".

"This is something we've wanted to do for a long time," explains Chris Martin (while stifling a laugh, presumably). "People like to smell nice and we thought we could help them out."

In a slightly unsavoury move, the organisers of Sonisphere are claiming that faeces-eating bugs will be used in their festival toilets to get rid of waste. Apparently, some people believed this, which is possibly scarier than the idea itself.

NEXT: Jean Michel Jarre's new direction and DJing with your eyes

Jarre has taken to his blog today to explain that: "I want to explore different directions, and in particular the notion of silence."

He continues: "I am sure you have noticed how the first few seconds of silence at the end of a track feel like they still belong to that track. To the best of my knowledge, the only work of importance ever composed in this field is the minute of silence played in solemn occasions, but I find the arrangement a bit basic.

"I would like to compose a silent album that would retain melodies, and mix the warm grain of analog silence and some sampled silence as well. Expect to hear something soon. Or not."

You can be fairly sure that when the phrase "revolutionary new control technology" is used on 1 April, it's not in earnest. A new system that enables you to DJ simply by looking into a webcam? That'll be balderdash.