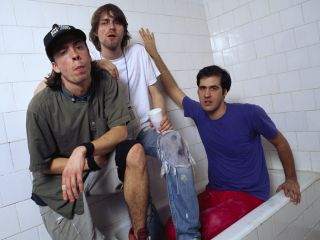 It's not Nirvana, but it's close: Dave Grohl has enlisted fellow former Nirvana bandmate Krist Novoselic to play bass in a guest appearance on the next Foo Fighters album. And with superstar producer Butch Vig, who helmed the alt-rock smash Nevermind, manning the board, it's becoming something of a Nirvana tribute, by three of the men who made it all happen.

Speaking to the BBC, Grohl reiterated that this next outing would be the Foos' heaviest record yet, meaning no ballads, no acoustics. "Each song is full on, the whole record is full on," he said. "In the 14 songs, there's not one acoustic guitar, there's not even one in the house."

Working "totally old school analog," in Grohl's garage, the singer and guitarist said, "This whole project has been really cool. I haven't made a record with Butch for 20 years."

With a tour for next year already being planned, Grohl said, "Basically, 2011, you're not gonna be able to get us out of your hair, that's what we're planning. I'm excited."