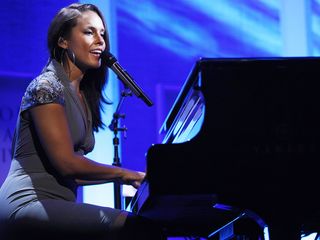 Alicia Keys's fourth studio album, The Element Of Freedom, is due out 14 December, and the multi-platinum, Grammy Award-winning singer-songwriter debuted some of her new songs in an unlikely setting: New York University.

Backed by a four-piece band and two-back-up singers, Keys performed the first single off her upcoming album, Doesn't Mean Anything (see video below), along with You Don't Know My Name, Falling, parts of Jay-Z's Empire State Of Mind (on which she is featured) and No One.

At the start of the evening, Keys participated in an interview segment, during which she shared her thoughts and revelations while recording her new album. "When I first started going to the studio, it was like I didn't know what to do," she said. "All I knew was doing it till the point of exhaustion - submersing myself till the point of possibly drowning."

Learning to "be free"

Keys said that things began to turn around when she allowed herself "to be free. With this album I found such a balance and I took things in that inspire me, which can come from anywhere. It just helped me enjoy the process first and foremost."

Despite her massive success, Keys revealed that one of her most difficult moments professionally came just recently: "I felt my lowest during my last record. I started to understand that I was dealing with people who I thought were my friends but in reality had other intentions," she said.

"So, things had to change. Sometimes you have to get rid of people in your life that don't work with you. You have to stay in your path and when people are pulling you down, you have to cut ties."

In her closing remarks, Keys gave the crowd - comprised mostly of aspiring songwriters - words of encouragement. "You are shinning so bright and I feel you," she said. "There's nothing that's going to stop you from doing what you want. You are a powerful human being with endless possibilities and everyday is a new day to get closer to where you want to go."