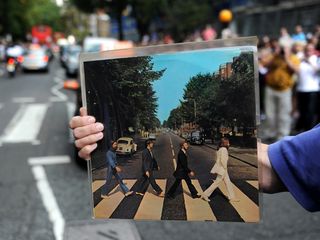 Fans flocked to Abbey Road in 2009 to celebrate the 40th anniversary of the Beatles album of the same name. (Image credit: ANDY RAIN/epa/Corbis)

It's being reported that EMI has put the world-famous Abbey Road studio complex, which played host to the vast majority of The Beatles' recording sessions, up for sale.

The Financial Times claims that Terra Firma, which acquired the record company in 2007, has been "courting bidders" for the facility, which is said to be worth tens of millions of pounds.

It's not currently clear whether it's just the building or also the Abbey Road name that's up for grabs, but given its strength as a brand, it's being speculated that the latter could actually be worth more than the former.

The question, though, is who would want to buy Abbey Road? It's no secret that competition for studio bookings is now fierce - let's not forget that it's now possible to make a decent-sounding record in your bedroom - so making money from the studio could be difficult.

Whoever does take ownership of Abbey Road, though, will be getting their hands on a sizeable slice of recording history, and that's got to be worth something.