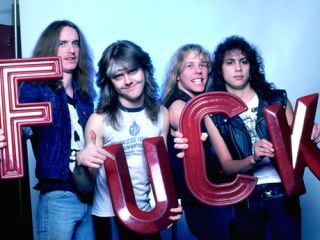 Metallica circa 1985 with a Big Four-letter word © Ross Marino/Retna Ltd./Corbis

Pioneered by Metallica, Slayer, Anthrax and Megadeth, thrash was the fastest and nastiest music of the '80s. In honour of Metal Week on MusicRadar we hit the throttle and track thrash from its defiant conception to its present day carnage, courtesy of Total Guitar magazine.

"Authority pisses me off. I think everyone should be able to drink and get loud whenever they want." When James Hetfield uttered those immortal words, he was of course talking about the loudest and most intoxicating form of music to come out of the '80s: thrash metal.

Nearly three decades after the movement emerged in 1981, the Big Four of thrash - LA's Slayer and Megadeth, San Francisco adoptees Metallica and New York's Anthrax - are still levelling crowds the world over. What's more, a whole new thrash scene has arisen in their wake and it's just as aggressive as the bands that inspired it.

As Tony Foresta of Municipal Waste said recently, his band's aim is "to thrash people's faces off and have fun doing it!"

The story of thrash metal has been told many times before, more often than not with a degree of uncertainty over which band came first and who played what. The reason for this is because thrash was primarily born from the metal underground, where clubs were sweaty and deals dodgy, and where no-one bothered to keep detailed records because they were usually passed out drunk on the floor.

But what we do know for sure is that in 1981, a Newcastle band called Venom released their debut album, Welcome To Hell, around the same time that New Jersey act Overkill recorded a song called Unleash The Beast (Within) and LA high-school act Leather Charm wrote a song entitled Hit The Lights. All three recordings featured high-speed riffage with a frenetic bass drum pattern - the two essential elements of what came to be known as thrash metal.

The basic thrash metal sound evolved from combining this crucial drum beat (itself borrowed from the hardcore punk scene) with the technical playing of New Wave Of British Heavy Metal bands such as Iron Maiden and the speed-freak tempos of Motörhead, Venom, Overkill and Leather Charm (along with a slew of other bands).

Leather Charm singer James Hetfield soon dumped his band and hooked up with a drummer called Lars Ulrich to form Metallica, releasing two demo cassettes in 1982, both of which were snapped up by the metal underground. The fearsome precision of Hetfield's picking and the sheer speed of his songs impressed a whole raft of musicians in the States and elsewhere, who - also spurred on by Venom's increasingly faster and nastier music - set about forming their own thrash metal bands.

1983 was thrash metal's real Year Zero, the primitive efforts of the first thrash outfits notwithstanding. Metallica (who had relocated from LA to San Francisco the previous year to get away from their hometown's poncy hair metal scene) released their debut album, Kill 'Em All, followed closely by Slayer who unleashed the fearsome Show No Mercy the same year.

On the other side of the country, Anthrax released Fistful Of Metal in January 1984, at around the same time that some genius in the media invented the term 'thrash metal' and used it in a review.

1985 was a good year for guitar fans, as the thrash scene received an intense boost with the release of Killing Is My Business… And Business Is Good!, Megadeth's debut album. Upon hearing the complexity and speed of the songs - composed by Megadeth's virtuoso frontman Dave Mustaine in a fury at being booted out of Metallica two years previously - the other bands realised that they would have to step up their game if they were going to compete in this harder-edged thrash zone where complex riffs were the name of the game.

By 1986, a clear frontline of bands had established themselves way above their competitors with immense songwriting and technical skills, production quality, a willingness to tour until they dropped and a bloodlust for warp-speed riffs.

Metallica and Megadeth were neck-and-neck when it came to guitar dexterity, with Hetfield and his fellow guitarist Kirk Hammett vying with Mustaine for machine-like rhythm and unearthly shredding, as Mustaine said back in the day: "After getting fired from Metallica, I wanted blood. Theirs. I wanted to be faster and heavier than them."

Anthrax and Slayer, on the other hand, were much more focused on intense speed and aggression, although the two bands soon diverged - Anthrax towards an anthemic, skatethrash approach and Slayer spiralling down into a darker, more brutal sound laced with Satanic lyrics and images.

Between 1986 and 1987, the old school thrash scene reached its peak with each of the Big Four releasing albums that redefined the face of metal. Metallica's Master Of Puppets fused epic, multi-layered songs with a vast production; Slayer's Reign In Blood was a colossal album stuffed full of warp-speed malevolence; Anthrax produced the superb Among The Living, proving that crowd-pleasing songwriting could co-exist with fast breakdowns and melodies; and Megadeth unleashed their rage with the frenzied Peace Sells… But Who's Buying?, on which Mustaine wrestled with his demons and came out more or less on top.

By this point an eminently mosh worthy B-league of thrash metal bands had emerged, encouraged by record labels' cynical urge to make a quick buck in the wake of the Big Four's success.

Brazil produced Sepultura and the UK supplied Onslaught and Sabbat, while Celtic Frost and Coroner came from the unlikely environs of Switzerland. Dozens of other thrashers saturated the scene, many of whom faded without trace.

Next page: death, black and grunge

But this overkill couldn't last, and by the start of the '90s it seemed as though the writing was on the wall for thrash metal. The brand-new death metal scene was finding its feet in Florida and Sweden, taking levels of speed and malice to such extremes that the thrash tunes of previous years seemed tinny in comparison.

The black metal scene in Norway, with its demonic obsessions, made thrash look a bit wussy too. And thanks to an unwashed trio from Seattle called Nirvana, the enormous tidal wave of grunge was poised to land squarely on album charts worldwide, redrawing the map for 'heavy' music and dooming all but the most dedicated of metal musicians to a job in Burger King.

Come 1991, we were all singing along to Smells Like Teen Spirit and thrash metal was like, so '80s, dude. It seemed as though thrash would never recover.

Ultimately the Big Four did survive the grunge wave, thanks to the loyalty of the thrash-loving fanbase. Of course, Metallica didn't need to worry about anything as finite as grunge: their legendary Black Album (1991) sold millions of copies. But in taking such a commercial leap Metallica abandoned their thrash metal roots for a more MTV friendly 'chart metal' sound, a move that many of their fans still mourn to this day.

Slayer also made it through by sticking resolutely to their guns, consolidating their speed and sonic violence and trusting in their fans. "We always knew that no thrash band was better than us," said Kerry King. "We just went out and kept doing our thing." This admirable stance carried them past the temporary hiatus in thrash metal's popularity and through to present day.

However, it was very nearly a different story for Megadeth and Anthrax, both of whom came close to commercial extinction in the era of alt rock and nu metal. Even though Megadeth leapt into the '90s with the immense Rust In Peace, Dave Mustaine attracted considerable criticism throughout the decade with a series of albums that so badly wanted to be radio-friendly that they were almost too painful to listen to.

Anthrax, meanwhile, underwent near-fatal line-up shuffles and also attempted a move into more commercial territory, disappointing their fans and only truly re-emerging from relative obscurity in the new millennium.

Fortunately for the Big Four, the thrash metal sound was embraced in the '90s by several new bands who upgraded its basic speedy template with elements such as the 'scooped' guitar tone and down tuning, to evolve what has become known as the 'post-thrash' scene.

The two bands most responsible for keeping thrash in the public eye throughout the '90s were Machine Head and Pantera, both of whom included fast breakdowns and abrupt tempo changes in their songs, just as the Big Four had done back in the '80s.

Machine Head's singer and principal songwriter Robb Flynn had learned his chops in Bay Area thrash act Vio-lence and paid due homage with his new band, while the frightening riff speed and precision of Pantera's Darrell 'Dimebag' Abbott (especially when paired with the supertight drumming of his brother Vinnie Paul) needs little introduction.

Next page: the cult of thrash

Sepultura should also be mentioned: although the Brazilians flirted with nu-metal at times, they returned to a thrash metal stance and Soulfly, formed by the Sepultura's ex-frontman Max Cavalera, have also upped the tempo as of late.

James Hetfield once ruminated, "When people start copying your style, you know that something must be happening," and by the late 1990s he was proven right when a wave of bands arose that proved just how influential the Big Four had been. The dedication of new bands such as Municipal Waste and Evile to reproducing the Bay Area crunch of 1985 is breathtaking, as is the enormous speed and power of Swedish bands like The Haunted, Carnal Forge and Corporation 187.

Nowadays, the cult of thrash is global, with its influence evident in the music of Hatesphere, Dew-Scented and Hypnosia at the bottom end of the commercial scale, via New Wave Of American Heavy Metal stalwarts Lamb Of God and all the way up to the globe-straddling riffage of Trivium. All of these bands incorporate at least some of the trademarks of thrash metal into their own sound.

And it doesn't stop there. In a case of the new school leading the resurrection of the old, a host of veteran thrash acts have reformed, recorded and toured over the last few years. Exodus, Destruction, Death Angel, Nuclear Assault, Tankard, Onslaught, Hirax, Mortal Sin and Sabbat have all trodden the sweaty boards once more.

And so, 26 years after Venom released Welcome To Hell, the original thrash bands are standing shoulder-to-shoulder with the new, continuing to pummel music fans the world over with one of the most insane, nasty and awe-inspiring forms of metal ever created.

Liked this? Now read: The 50 Greatest Heavy Metal Albums Of All Time