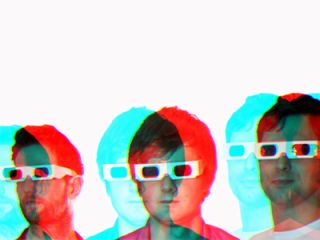 There are two undeniable themes running through this weeks musical endeavours: 1) bands are trying new things online, and 2) rap biopics are all the rage.

And while new iPods and Michael Jackson's ever-growing tour dominate the headlines elsewhere, we'd hate for you to miss these eight gems…

1. Oasis are free this Sunday

Noel Gallagher recorded his set for the Teenage Cancer Trust at London's Royal Albert Hall, called it The Dreams We Have As Children ( a lyric from Fade Away) and teamed up with UK newspaper The Times to give it away. Single songs have been drip fed through iTunes all week but another 11-track CD is free with The Sunday Times. Available on Sunday (15 March), obviously.

SFA will broadcast a live performance of their new album Dark Nights/Lights Years on 16 March at 8pm. It's the same day as the digital release and marks a new and interesting way of previewing new material. We like new and interesting things so head to Superfurry.com to watch it.

In related news, this could mark the beginning of outdoor-only gigs for the Welsh rockers: "There are no more indoor gigs for Super Furry Animals," frontman Gruff Rhys told NME. "The music [on the new album] is on an epic scale - it'd be wasted indoors."

Speaking of interesting band antics online, Keane are all set to perform the first ever live webcast in 3D on 2 April at 8pm. You'll need to head over to Keanemusic.com to order your 3D specs… which are free if you buy the 7" version of new single Better Than This (released 16 March). It's a novel idea (and a novel way of shifting records).

Anti-flag have been forced to cancel a European tour because frontman Justin Greever bombed "head first" into the crowd and broke his collar bone at a gig in Norwich, UK. According to the band's official statement, drummer Pat Thetic began the tour with three broken ribs and guitarist Chris Head had to fly back to the US from Glasgow after a death in the family.

5. Graham Coxon's made a concept album

Despite new Blur commitments, the guitarist has announced a new "primarily acoustic" solo album called The Spinning Top. The concept "follows the story of a man from birth to death". It's all set for a 11 May release and features a bunch of special guests. A full Coxon-only tour is expected for autumn 2009.

New wave heroes Devo have announced plans for a new album, the first in nearly 20 years. The extremely long-awaited follow-up to 1990's Smooth Noodle Maps is set for an autumn 2010 release. You can catch the yellow boiler suit-wearing gentlemen at this year's ATP festival.

7. NWA biopic is actually in development

A movie chronicling the rise and fall of NWA and its founding members Eazy-E, Dr Dre, Ice Cube and MC Ren is apparently already in development. Ice Cube, Dre and Eazy-E's widow Tomica Wright are at the helm as producers and are actively searching for a director along the lines of Curtis Hanson (8 Mile's chief). Hmmm, not too sure about Hanson, but isn't Curtis Jackson aka 50 Cent a dab hand?

8. Notorious BIG speaks from beyond the grave, was a method actor

"[Biggie] has come to me many times in my dreams. I don't think he's happy at all, at all!... Biggie was so much more than what they put him out to be in that movie."

Incredibly, there is related Notorious BIG news: P Diddy has confirmed that Biggie was genuinely receiving oral sex during the recording of Respect. "Actually getting some head?" Diddy told The Huffington Post. "Yeah".