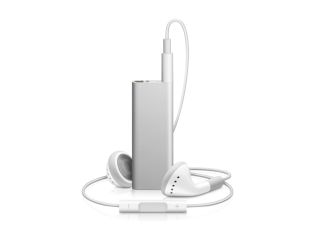 Apple has unveiled a new version of its iPod Shuffle music player. This reverts to the 'vertical' design of the original model, and is also the first iPod to feature VoiceOver technology.

The new version has a capacity of 4GB, but is just 45.2mm high, 17.5mm wide and 7.8mm deep. All the controls are now on the headphone cord rather than the player itself.

VoiceOver is a new Apple innovation. If you press a button while you're listening to a song, you'll be told its name and the artist performing it through your headphones.

This might sound like a bit of a gimmick, but given the Shuffle's lack of a display, it could actually prove to be rather useful (especially now that you can store up to 1000 songs).

The new iPod Shuffle can be ordered now in silver and black and will ship in 3-5 business days. It costs $79/£59.

The 2nd generation version is still available too.