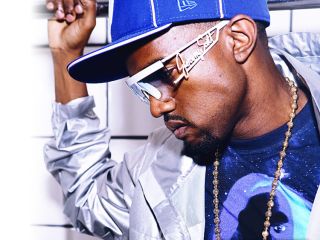 We've gone trivia crazy this week: starting today is the first of four parts in our 101 more facts you never knew about music. So let's get back to some hardcore news, shall we?

Ok, so we've been 'on it' all week, but somehow, meaty morsels always manage to get through the net. So here they are, five (other) things we've learned about music this week…

TV On The Radio's Dave Sitek produced YYY's latest album It's Blitz!. He, and bandmate Tunde Adibimpe, also guest on a track called Dragon Queen."We must have done 200 versions of it," front 'Yeah Karen O told NME. "But in the end I think it has a little bit of a swagger, and a little bit of an intimacy that other tracks don't necessarily have."

We can believe it Miss O - we'd all be intimate with anything we did 200 times.

2. P Diddy is a member… of Arctic Monkeys

When @iamdiddy Tweeted this last month: "Still partying!! Just kickin it wit my boy matt from the ARCTIC MONKEYs! I'm the the newest member of the GROUP!," we thought, 'whatever.' Turns out they are actually bosom buddies, as Monkeys' drummer Matt Helders' above video diary shows. Whatever next? Neil Diamond and Limp Biz… oh, hang on that was last week.

3. Franz Ferdinand are high in morals

The Scottish crew turned down a lucrative advertising deal (and promised fame and fortune in the US) because they didn't want to promote 'a famous Mexican restaurant chain' and be associated with fast food. "They asked if they could use our song Bite Hard and I think the idea was people were going to be biting into their chilli enchilada while the song was in the background," recalls frontman Alex Kapranos.

Next page: Kanye West and the art of Twitter

Kanye didn't like his South Park 'gay fish' alter-ego very much but"as long as people think I act like a bitch this type of shit will happen to me," he blogged. "I got a long road ahead of me to make people believe I'm not actually a huge douche."

He's also cleared his schedule for 6 months to devote more time to various clothing projects including his own line Past Tell. Apparently, he's also "begged" Nike to let him design his own sports range.

Miraculously, the rapper did manage to find a few moments to collaborate with Killers' mainman Brandon Flowers. "I was working on this dope ass song with Jared [Leto - 30 Seconds To Mars] and Brandon stopped by. I played them some of the new Jeezy beats and before everybody bounced, Brandon hopped on the keyboard and I hopped on the MPC. Shit was dope."

For an artist, giving away new music is a risk, but an essential one in the digital age. Giving away new music via Twitter, however, is a stroke of genius. Joining The Streets' Mike Skinner in the 'let's use Twitter for more than just massaging our egos club' is Lily Allen, who sent fans on a series of 'treasure hunts' via clues on Twitter. The treasure being concert tickets.

Oh, hang on, she's just confessed her love for fellow Twitter-addict John Mayer. Via Twitter. Who just got dumped by Jenifer Aniston. Via Twitter. Probably.