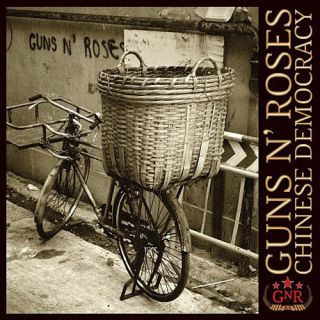 As Axl Rose unveils the infamous Chinese Democracy, Music Radar counts down 33 facts you need to know about the most expensive album ever made.

1. It's taken a third of Axl Rose's life

Lest we forget, the making of Chinese Democracy began at LA's Complex Studio in 1993, when Rose was a fresh-faced enfant terrible of 31. When it's released on November 24, he will be a middle-aged recluse of 46. If you'd had a baby when he hit 'record', your kid would now be sitting exams and stealing your cigarettes.

2. The world has soooo changed

Since 1993's The Spaghetti Incident?, the world has changed beyond belief. Back then, George Bush Snr was US President. The internet happened. The MP3 format was devised. Liam Gallagher, rock star, hadn't been invented and Kurt Cobain was hanging in there. Indeed, Guns N' Roses last albums of original material, Use You Illusion I and II, were released a week before Nivana's Nevermind in September 1991.

3. It was inspired by the Dalai Lama

Everything and everyone else has spun through Axl's revolving door, but the title of Chinese Democracy has stuck. Announcing the title track at a 2001 show in Vegas, the frontman revealed it was inspired by the 1997 film Kundun, which documents the exile of the Dalai Lama from communist China. Pretty deep stuff for a man who called his last album The Spaghetti Incident?

When GN'R swaggered out of LA in 1985, their fierce unity suggested the band that bangs strippers together, sticks together. Chinese Democracy split the last gang in town in less than four years, with Slash departing under a cloud in 1996 and holding the door open for Matt Sorum and Duff McKagan.

Aside from Chairman Rose, the sole survivor from the Use Your Illusion period is keyboard player Dizzy Reed. Keep your head down, Mr Reed…

According to original A&R man Tom Zutaut, Axl insisted that everyone involved in Chinese Democracy was approved by his late spiritual therapist Sharon 'Yoda' Maynard (pictured). "You had to get a black and white picture to Axl's assistant and then you'd be vetted and told if you could work with him," says Zutaut.

Zutaut also claims the induction process for any musicians involved re-recording every song off Appetite For Destruction.

9. It's a running joke in the media

In April 2006, Spin ran an online 'review' of Chinese Democracy by Chuck Klosterman, subsequently revealed as an elaborate April Fool's Day hoax. How Axl must have laughed…

10. It's taken eight guitarists to get here…

11. … and that doesn't include the celebrity guests

The nicest man™ and biggest ego™ in rock formed an unlikely alliance in the early stages of Chinese Democracy, as Brian May laid down a solo for Catcher N' The Rye. "He's not always easy to work with," was the Queen guitarist's diplomatic assessment. May's solo has since been dumped off the album.

12. Dave Navarro only lasted an afternoon…

How many egos can you fit into a top LA recording studio? Only one, it seems. "I spent an hour-and-a-half at the studio," shrugs the Jane's Addiction peacock, who played the solo on 1999's stopgap track, Oh My God. "It just never worked out."

Ozzy's grizzly sideman was briefly in the frame circa 1995. "I had a blast with those guys, but nothing ever materialised," he recalls. "It could have worked out. At the time, you had Slash, Duff and Axl, so it was almost like the original lineup. But that's when Black Label Society happened."

14. The backroom boffins had it tough

Failure to recreate the sound in Axl's head was punishable by sacking with rolling heads including producers Mike Clink, Sean Beavan, Youth, Roy Thomas Baker and Moby. "Being the most successful rock star on the planet for a few years really took a psychological toll," theorised Moby..

15. … and playing drums wasn't a picnic, either

As Axl tried to capture the drum sound of Smells Like Teen Spirit, Chinese Democracy's turnover crept up to Spinal Tap proportions, with Matt Sorum, Bryan 'Brain' Mantia and Josh Freese all warming the stool for current thumper Frank Ferrer. Ever thought of just asking Dave Grohl and Butch Vig?

16. It gave employment to the world's oddest guitarist

Buckethead: Yes, he has a bucket. On his head.

Staring out from the eyeslits of a Halloween-style mask, communicating through a glove puppet and never pictured without his trademark KFC bucket hat, session ace Brian 'Buckethead' Carroll was the obvious candidate for the oddest album in rock history. He arrived in 2000 - and quit four years later.

He might be a little strange, but Bucket can play.

Of all the cameos, most bizarre was Shaquille O' Neal, whose guest rap mercifully doesn't make the cut. "I saw Guns N' Roses on the bulletin board of the studio, so I stuck my head in," remembers the strapping slam-dunker. "They asked me to join them, so I started freestylin' over their track."

Logically enough, given his poultry fixation, Buckethead insisted he record his parts from a makeshift coop erected in the live room. "He's got his chair and a little sofa," recalls Zutaut, "and there's a rubber chicken with its head cut off hanging from the ceiling, and body parts. It's totally Buckethead's world."

The pièce de résistance, meanwhile, was a pile of faeces left in the coop by Rose's timber wolf puppy. "One of the engineers says, 'Bucket, we'll get it cleaned up' and Buckethead says, 'I love the smell of dog poop - leave it right here'," recalls Zutaut. "Three days later, the studio stinks to high heaven…"

20. … and some dubious pornography

21. It was almost gazumped by The Offspring

In 2003, the ageing skate-punks threatened to christen their seventh album Chinese Democracy. "You snooze you lose," noted singer Dexter Holland. "Axl ripped off my braids, so I ripped off his album title." They relented, plumping for Splinter instead.

Perhaps the most leaked album in history, Chinese Democracy caused another high-profile court case in August, when Kevin Cogill was arrested at his Los Angeles home for uploading nine tracks. The 27-year-old will plead guilty in the Los Angeles Federal Court in December.

David Gilmour's session men probably do a nine-to-five. That's not how it works with Rose. "He'd come to the studio once or twice a week," says Zutaut. "Or he might come at four in the afternoon and work 'til midnight the next day. That's how always GN'R operated - when they want to record, you record them."

24. And there was plenty of free time

With Axl often absent and unreachable, the band made their own fun. Bassist Tommy Stinson released his own solo album during downtime, while guitar tech Billy Howerdel managed to form A Perfect Circle.

26… because no expense was spared

"One area where an astronomical amount of money was being spent was in rented gear," says Zutaut. "It's a bit of a luxury to have a '59 Les Paul at however many thousand dollars a month when it isn't even being used. We'd paid enough in rental for it that we could have bought it!"

Contrary to reports of 60 vintage guitars being primed for action, Ron Thal's setup was "real simple", comprising a Gibson Les Paul, a Vigier fretless, a Marshall JCM800 head, a wah and a Boss BD-2 Blues Driver.

28. Not everyone is excited

Covers band UK Guns N' Roses won't be learning the Chinese Democracy songs. "We feel it probably won't be anywhere near the work by the original and best line-up," they sniff. Read MusicRadar's interview.

29. The first track for public consumption was Shackler's Revenge

It was released via the Rock Band 2 video game. Could you keep up?

30. It comes with a free Dr Pepper

Having promised a free can of Dr Pepper to all Americans upon the release of Chinese Democracy, soda giant Dr Pepper Snapple Group have seen their bluff called. "We never thought this day would come," said a spokesman. "Now it's here, all we can say is the Dr Pepper is on us."

31. Buckethead has made the cut

Dr Pepper's pledge came with a stipulation - no free fizz for ex-guitarists Slash and Buckethead. "As some of Buckethead's performances are on our album," said Rose, "I'll share my Dr Pepper with him."

32. Slash wants it to succeed

A lesser guitarist would surely wish failure on his estranged frontman. Not Slash. "That sounds cool," he remarked when played the title track on Boston's WBCN station. "It's good to hear his voice, you know?"

According to ex-Skid Row frontman and Rose confidante Sebastian Bach, Chinese Democracy is the first instalment in a rock 'n' roll masterplan. "The thing that nobody gets," he insists, "is that he has like, four albums done. I've heard it. So get ready." Hey, MusicRadar predicted that already.

It won't take us 17 years to write, hopefully…