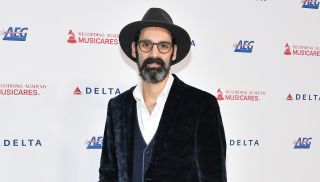 Gibson had another impressive NAMM with a strong showing of 2020 models across the board, but there's no doubt it hit a rocky patch with its public image last year with the Play Authentic video controversy.

As the presenter of that video, Gibson Director of Brand Experience Mark Agnesi took the brunt of the online criticism from the guitar playing community, but now in an interview with Guitar.com, his colleague, Chief Merchant Officer Cesar Gueikian has put his hands up to it.

“Mark Agnesi is one of the most knowledgeable and amazing Gibson guys, and I’ve learned so much from him over the years as his client," Gueikian started. "I’ve got a lot of vintage Gibsons from the 50s and 60s that I bought from him. And I always relied on him for knowledge, because I’m a nerd and I want to learn things.

“But I personally made the mistake of having Mark do that video, and if you ask me what I’d like to have done differently, it’s that. At the end of the day, our objective is for us to protect our fans, and when someone buys a Gibson they expect the quality of a Gibson, and that’s a good thing."

And he countered that it was the method of delivery that didn't help their cause.

“But using social media to try and deliver the message was probably my biggest mistake, and in hindsight, I think I shouldn’t have done that. What I was trying to do… I didn’t see it as us being ‘threatening’ or anything like that.

“We want our fans to buy our guitars because they believe we are making the highest quality instruments and that they are made to a higher quality standard than any other manufacturer. And all we wanted to do was to protect them from anything that could be misleading.”