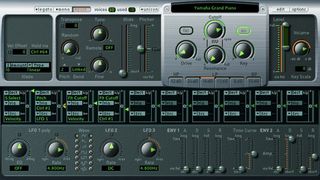 As computer performance has improved dramatically in recent years, software samplers have moved into what was formerly the turf of hardware titans. Emagic Xtreme Sampler 24 Bit (EXS24) 1.0 is Emagic's sampler plug-in for Logic Audio and a complement to its analogue-modelling software synth, ES1.

EXS24 offers almost all the features of a hardware sampler. It provides an intelligent user interface without the hassle of coaxing your computer to communicate with external hardware. EXS24 is smoothly integrated within LogicAudio, and it can harness Logic's solid waveform editor and native plug-in processors. EXS24 is an intuitively designed tool that helps you focus on making music.

With Logic Audio 4.1, Emagic introduced a new type of audio object, the Audio Instrument. The Audio Instrument category was designed with virtual instruments like EXS24 andES1 in mind. As many as 16 EXS24 SamplerInstruments can be used at once, each with a maximum of 64 mono or32 stereo notes of polyphony. The number of available notes depends on your computer's processing speed.

EXS24 reads AIFF, WAV, and SDII formats and can handle8- to 24-bit resolution and sample rates as high as 96 kHz —something no hardware sampler I know of can do yet. EXS24can also import Akai S1000/3000 file formats, and support for more formats is on the way.

EXS24 requires version 4.1 or later of Logic AudioSilver, Gold, or Platinum, or MicroLogic AV. If you have version 4.0, it will automatically update when you install the plug-in. EXS24 works well on the Mac orWindows platform. For this review, I used Logic AudioPlatinum on a Power Mac G4/450 MHz with 256 MB of RAM.

Getting started is simple. Logic Audio 4.1 comes preconfigured with an Audio Instrument object already in place. You can insert the EXS24 plug-in into an Audio Object by setting the Channel parameter to Instrument. (The plug-in comes in mono and stereo.) Select the EXS24 plug-in by clicking on the top insert slot within Logic's virtual mixer and holding the mouse button down. Then double-click on the blueEXS24 label to bring up the main Editor window, a very sleek control panel with a decidedly analogue look (see Fig.1).

Working within EXS24's main Editor is easy. A flip menu(Emagic's version of a pop-up menu) lets you load SampleInstruments from your hard drive into RAM and then play them back in Logic. Any adjustment made in this plug-in window can be saved. You can quickly switch to its companion, the InstrumentEditor.

EXS24 Editor features a lowpass filter with four selectable modes: 12 dB, 18 dB, 24 dB Fat, and 24 dB Classic. The resonance qualities of the two 24 dB filter modes resemble the sound of analogue filters. A Drive knob lets you overdrive the filter, and you can link the cutoff frequency and resonance knobs for simultaneous control. The Key knob determines how much the filter's cutoff frequency tracks the note number.

The low-frequency oscillators, LFO1 and LFO2, are polyphonic and monophonic, respectively. Whereas LFO1 starts its cycle every time a note is struck, LFO2 is always on. LFO1 is applied separately to each EXS24 note, whereas LFO2 modulates all notes identically. Both LFOs have rate controls that can be set in note values or hertz, and LFO1 has an additional knob to adjust the decay or onset delay times. The LFOs provide seven wave shapes, including triangle, sawtooth, square, and random, which you select by clicking on corresponding radio buttons.

Dedicated ADSR envelope generators modulate the filter and amplifier stages, and there are selections for monophonic, legato, and polyphonic performance modes. Like some old analogue keyboards, EXS24 features glide, which can be used in mono and legato modes.

Sliders are available for controlling sample start time, tuning, pitch, glide, ADSR values, LFO1 and LFO2 modulation range, and amplifier level. Some sliders are split with an upper and lower control that establishes a modulation range for Velocity and the mod wheel. You can move the entire segment by clicking and dragging in the area between the split sliders.

Although EXS24's onscreen control surface is compact, it's easy to navigate and tweak settings. You don't have to step through multiple screens to get to a given feature as you would when using a hardware sampler. You can also automate all yourEXS24 fader moves while recording in Logic.

However, not all functions are available in the Editor. A more extensive Controls screen includes all parameters in the Editor and extra controls for adjusting pitch bend, transposition, fine-tuning, filtering using Velocity, key scaling, and output level (see Fig. 2). The additional parameters are marked with bullets next to their names.

The Instrument Editor lets you assign, edit, and map samples across a keyboard (see Fig. 3). There, sound files on your hard drive are assigned to Zones, and Zones can be arranged into groups. Within each Zone, you can set each sample's keynote and playback range on the keyboard. There are also fields for reverse, one-shot, and loop modes. With loop mode engaged, you can set auto-crossfade times.

While using EXS24, the first thing I noticed was how quickly I could audition, assign, and shape sound files (see the sidebar “Multisampling Audio CDs”). It was easy to get blissfully lost in creative reverie as I fiddled with the LFOs and filter settings. Editing mundane sounds gave them a warped new life, resulting in rich bleeps and gurgles instead of the sterile woodwind I started with. Generating alternate mixes became easier, too, as I could quickly alter a drum kit's sounds, deepening bass tones and importing new percussion samples. EXS24 is an on-the-fly kind of sampler.

I longed for the ability to use Logic's arpeggiator to control EXS24, but the sampler doesn't respond to arpeggiator data. I'm told that the problem is with LogicAudio rather than EXS24. Also, some LogicAudio functions, the looping function in the upper-left parameter box, for instance, do not work with AudioInstruments such as EXS24. Emagic is aware of these problems, and an update should be available soon.

If you have a library of Akai S1000 or S3000 CD-ROMs, expect smooth importation of samples into EXS24. I could simulate the sound of my Akai S6000's filters, but I missed the power and flexibility of the S6000's filter options.

Having plenty of RAM is crucial to obtaining the maximum 64-note polyphony. After Logic Audio takes its portion, EXS24 quickly consumes memory. With 256 MB in my computer,I could use EXS24 with Logic Audio, but adding another 128 MB of RAM would definitely be in order.

When I used the single-processor G4/450 MHz, I could use all 16instances of EXS24 with a couple of filters engaged. That's a lot of samplers, and I didn't encounter any problems until I started adding more filters. There were no crashes, but I experienced repeated Direct Input/Output driver errors because I hadn't set up the system parameters correctly.

As it turns out, filtering rapidly uses up CPU headroom. To avoid problems, set your driver's buffer I/O size according to the application. Setting a smaller buffer length results in less latency and more playability, but it also consumes more of your CPU's horsepower. During mixing, you can reset the buffer and engage more filters. You can also bounce your performances down to audio files to prevent overtaxing the CPU.

EXS24 is superb for crafting sound files, but the file-management system is lousy. Sample Instrument files are stored in only one folder. As Sample Instruments are added and the folder grows, it becomes more difficult to sort though the selections.

At the winter NAMM show in January, Emagic announced that ahierarchical filing system will be available in LogicAudio 4.7, which is due about the time this article goes to print. The new version will feature a hotkey to provide easy access to EXS24 parameters. In addition, Logic AudioPlatinum 4.7 will allow as many as 24 copies of EXS24to run simultaneously.

Emagic also announced the forthcoming release of EXS24TDM at the NAMM show. That version will be compatible with DAE, making it possible to use the plug-in with TDM-compatible systems. Combining EXS24 with TDM's power will save users from the inconvenience of constantly switching between DAE and direct I/O. Other new features will include as many as 32 copies running simultaneously, direct-from-disk streaming, and close integration between EXS24 TDM and Logic AudioPlatinum. Another new version, EXS24 VST, will be compatible with any VST 2.0 host application. Both new versions will import SampleCell and SoundFont2 formats from Windows and Mac operating systems.

Even with a couple of minor drawbacks, EXS24 is an exceptional addition to the Logic platform. It won't put your hardware sampler out of business yet, but you might find your old friend getting lonelier by the week.

As more laptops show up onstage, you might consider using this software in live performance. The only stability issue I encountered occurred because I hadn't properly set the buffer I/Oto to avoid overloading the CPU. Unless you need EXS24 to function as 16 samplers onstage, overloading your processor shouldn't be a problem. With a properly configured MIDI controller addressing faders in the main Editor, you could jam for hours with EXS24. Its portability, on a laptop, also makes EXS24 the perfect travelling sampler for doing studio work.

Even for those who have never used a sampler, EXS24 is easy to learn and a snap to navigate. The minimum processor speed for running EXS24 is 200 MHz, but that speed barely scratches the surface of what the software can do. I'd recommend at least a G3/350 MHz with a minimum 256 MB of RAM. Anything less will hamper performance.

If you own Logic, there's no excuse not to have EXS24. Considering everything that it does, it's a great value. It's inexpensive, it's tons of fun, and it might just change the way you work in Logic Audio.

Here is a multisampling tip from Emagic that harnesses the power of Logic Audio's editing features for use withEXS24: With an audio CD, utilize Logic Audio'sOpen Movie command to select a track you want to sample. Import the track into the Audio Window. Drag the audio data into the Arrange window, and then go back to the Audio window and select the StripSilence command. This splits the file into separate audio regions in the Arrange window. The number of regions depends on the threshold percentage you set; the higher the percentage, the more regions you get.

In the Arrange window, select Convert Regions to IndividualAudio Files. This results in separate files you can save on your hard drive. Once the files are saved, you can open upEXS24 Instrument Editor, activate Load Multisample, and select the files you just created. Each sample will be assigned to its own Zone. You can then assign them to Groups and tweak their global performance.