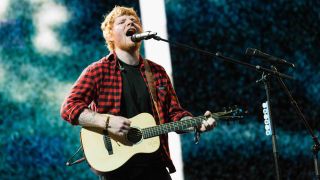 Love him or hate him, Ed Sheeran was Sunday’s Glastonbury festival headliner, but the heavily layered sound produced by the lone singer/guitarist left some viewers confused, accusing The Ginger One of using backing tracks or miming.

MusicRadar readers, the music tech-savvy lot that you are, will know that, of course, Ed was employing a looper pedal, and Sheeran himself was forced to reveal his not-so-secret sonic source on Twitter.

Never thought I'd have to explain it, but everything I do in my live show is live, it's a loop station, not a backing track. Please google xJune 26, 2017

For anyone interested in how Sheeran produces his live performance witchcraft, it comes courtesy of the Chewie 2, a looper he designed with his tech Trevor Dawkins, which integrates with looping plugin Mobius, according to Equipboard.

Ed gives a brief run through of Chewie on the Today Show below.

To emulate Ed’s looping skills (but possibly not his success, sorry), check out our lesson on how to use a looper pedal in the style of Ed Sheeran.