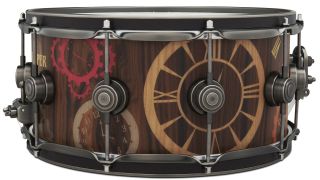 When it comes to intricate snare finishing, few global brands are as dedicated to detail as DW. As an example, look no further than the Californian latest project: the Timekeeper snare drum.

However, the detail doesn’t end there, with the Timekeeper’s striking visuals taking its spec to the next level. First up are the inlays - 351 pieces of laser-cut, exotic and dyed material create the ‘Clock and Gear’ graphics, while the drum is finished in an outer veneer of Santos Rosewood.

DW’s John Good explains the concept of the Timekeeper, “Some of my favourite drummer’s do just that.  They keep time.  And they do it in a way that is so admirable.  These often-unsung players play for the song.  It’s a cliché, but it’s so right on the money.  The Timekeeper is in tribute to those players.”

As much as the Timekeeper is visually striking, Good adds that it was made to be played rather than just collected. “Our goal is to not have this drum solely be a memento, it’s designed to be played. I think Purpleheart is an excellent choice for a workhorse snare and we see more and more drummers discovering it and being blown away by what it can do.”