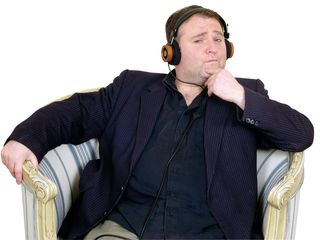 Mathew Priest is taking to the Edinburgh Fringe comedy stage

Question: What do you call someone who hangs around with musicians?
Answer: a drummer.

Oh yes, the poor drummer has always been the butt of poor jokes from fellow musicians but now, two of Britain´s sharpest skinsmen and wits are turning the tables. They´re taking their own drum-centric raconteur show to the Edinburgh Fringe Festival.

Mathew Priest from Britpop trio Dodgy and Maurice Bacon from 1960s veterans The Love Affair are starring in Two Drummers Drumming at The Bongo Club from 4-24 August, in an ''hilarious, percussive and educational journey through the world of popular music, as viewed from the backseat'' Well, that´s what Mathew tells MusicRadar, and we´ll give him the benefit of the doubt.

Despite his holy name, Priest was once voted Ligger Of The Year by the Sun newspaper, so expect plenty of irreverent fun. And jokes about singers. More info from the Two Drummers website and their video blog.