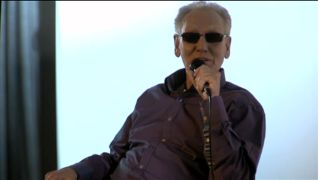 Ginger Baker's been in the media quite a bit off the back of the fantastic rockumentary Beware Of Mr Baker, and this week he revealed that he actually always wanted to be a professional cyclist.

"I was obsessed with the idea of being a cyclist when I was a kid, and I rode everywhere. One day I had a smash-up and the bike was a write-off," he told the Calgary Herald.

"I had to earn some money, and this mate of mine said, 'Why don't you play drums?' It's funny - they all knew I was a drummer, and I didn't."

He was rather less forthcoming in this onstage Q&A hosted by the Guardian's Michael Hann at a screening of the film in London.

HOW TO WRITE A SONG

Dave Grohl takes time out from drumming for Queens Of The Stone Age to give Tenacious D's Kyle Gass lessons in songwriting. Very funny, and actually quite informative too. We're dearly hoping that "Life's a bitch, but keep on trucking…" appears on the next Foos album.

WHAT WE'VE BEEN LISTENING TO

Northern Irish punk legends The Undertones have a new, definitive, CD and DVD boxset out with all their hits, interviews, rarities and live stuff. We've also bagged an interview with drummer Tommy Doherty - look out for that in the August issue of Rhythm! We've also been checking out the debut album from guitar'n'drums female duo Deap Valley, Get Deap! It's very raw, very bluesy, very rocking.