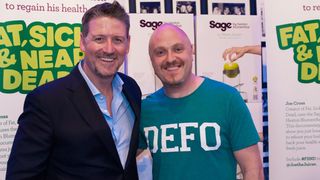 Hi everyone! As always, I really hope this finds you well. Welcome to an extra special feature and guest! The health movie Fat, Sick & Nearly Dead is the reason I am here today posting this blog for YOU… never has a film stopped me in my tracks to PAUSE and change the direction of my health and life for the better.

Seeing FS&ND back in January 2012 (via an unofficial YouTube link ) flicked a switch in me that said, "Oi, lard ass! - get ya sh*t together! You're a dad, you're a husband and you're a drummer that needs to ROCK!… but you're lethargic, you look bloated and puffy… and you need to stop buying fruit just as a decorative bowl feature."

Either way, something BIG changed in me and I was inspired! The man behind movie had a "bloke next door" approach that resonated with me, and the very next day I went out and purchased a juicer, fruits and vegetables and I haven't looked back since.

Eighteen months later (and 4st lighter), I'm so very grateful to have discovered this movie… which is now finally (and officially) launching here in the UK.

The film's writer, director and 'star' was kind enough to recently check in with me and Rhythm magazine to talk about juicing benefits for a touring drummer as well as sharing his favourite records, bands and drummers.

Joe Cross is the founder and CEO of Reboot With Joe.
His personal story of transformation was chronicled in the documentary Fat, Sick & Nearly Dead which has been seen by more than 5m people worldwide. The incredible response to screenings of the film inspired Joe to create Reboot With Joe, making the tools, information and support available to enable anyone to reclaim their wellbeing. He's currently filming a new documentary and spends time between Australia and the US, always with a juice in hand.

Why do you think juicing would help a drummer/musician's lifestyle and on-stage performance?

"Since I made Fat, Sick & Nearly Dead and started Reboot with Joe, I reckon I travel about as much as a musician on tour. And the one thing that I've found keeps my energy up - more than caffeine, sugar, junk food or their less wholesome alternatives - is juice. It's fast, it's easy and it gives you a powerful kick. Performing for a living requires a lot of energy and drumming is intensely physical, so fuelling your body with supercharged juice that has vitamins, enzymes and micronutrients is going to make giving 100% on stage a heap easier. And after a certain age, the wicked hangovers you can get from fast food, Jack and Cokes and too little sleep start to catch up with you. For me, juicing is a way of reclaiming the vitality you had when you were young and hungry for excitement."

What do you listen to when traveling on the road ? What are your favourite albums, bands and drummers?

"I've always loved music so I have a top list for all three!"

"I have to say, there aren't many juices out there that I don't like. There is such a wide variety of vibrant fruits and vegetables out there that can be juiced in different combinations to create amazing flavours. Sometimes I even shock myself at how good they can taste.

"My favourite juice and the one that was my go-to throughout my 60-Day Reboot is The Mean Green."

"Another favourite of mine is the Summer Games Juice. It's great after a workout to replenish electrolytes, which is fantastic for drummers since they are always working up a sweat on stage! This juice is naturally packed with electrolytes, potassium, magnesium and sodium, plus antioxidant, anti-inflammatory and antibacterial compounds to help keep your muscles and immune system healthy and strong."

"If I'm at an event or busy shooting all day for my next film and I know I'm not going to be able to eat for a while, and drummers on stage all night probably know that feeling, I go for a smoothie to help keep me sustained longer. One of my favourites that keeps me full of energy and satisfied is the Starry Night Delight."

You can see the movie trailer here: