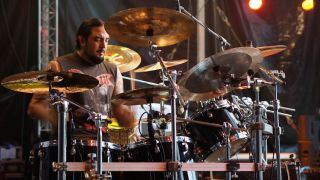 Not only is Martin Lopez the former drummer of prog behemoths Opeth; he's also the powerhouse behind metallers Soen. Without a doubt, he knows a thing or two about what makes for a cracking sticksman.

As Soen release new single The Words (which you can see below), Martin shared with us his top ten drum heroes.

The best drummer ever, groove-y and creative like no one else, king of Latin Jazz. Plays with a lot of heart and manages to sound relaxed and soulful while doing advanced grooves.

His drumming on Ritchie Blackmore's Rainbow, especially on Catch The Rainbow and The Temple Of The King should be more than enough to make it to any Top Ten list. He possesses the quality of not doing much but still make it very interesting. A drumming gentleman.

"The Atomic Clock" and the best death metal drummer, heavy, fast and solid.In my case, the drummer that made me want to learn all the death metal chops.

Amazingly talented drummer, he dominates both Jazz and Rock and is also an outstanding Latin Jazz drummer.He kills it on the track Caribe by Michel Camilo, he's accompanied by Giovanni Hidalgo on percussion and they co-work amazingly.

A very influential drummer for me, majestic fills and odd rhythms while keeping it groovy. Also very important for the drumming world.

A beast, very energetic drummer with a lot of character. He manages to apply very classy fills while surrounded by chaos. I always admired his fills and aggression.

A very innovative and modern metal drummer, stands out for his tasty fills and original rhythms. One of the very few drummers that can make you dance while playing a death metal song.

A lot of heart and musical vision. One of the godfathers of rock. The original, really innovative drummer back then.

Polyrhythms like you never heard before. Strength, accuracy and a mind blowing sense of rhythm. Hard hitter.

Sophisticated and accurate, plays to the music while keeping it rhythmically interesting. Very good live drummer.