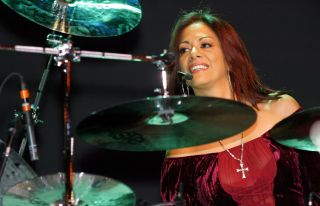 Multi-talented drummer, percussionist and singer Sheila E returns to the UK this week with a show at Under The Bridge in London on 23 November, and Rhythm got the skinny on what she's been up to including her new album, Icon.

Your new album, Icon, has been some time coming.

"I didn't want to do a record for a long time because I don't like record companies so I started my own label, Stiletto Flats Music. I was writing my autobiography which will be out next year and in the midst of that I saw some things that I was writing and I said, 'This needs to be a song.' I went back to Oakland and recorded at a new studio there. I took the whole band and in three days we did all the basic tracks, then I had to overdub some of the horns to stack them. I took it home and started putting on artists that I wanted as special guests and did my vocals, mixed it and it was done."

Did you track live with the band?

"Oh yeah. We play to a click track so if I want to do overdubs we can grab the section on the grid in Pro-Tools. I don't like the sound of the click. It's a frequency that really hurts my ears so I usually use a cowbell or percussion as the click. For this record I put together percussion rhythms as my click track because I knew I was going to overdub. I started with the drums and I overdubbed the percussion. The cool thing I did on the record was all of my solos - the conga solo you hear in the opening, the timbale solos - I just did them in one take so it's just like I was playing live. I didn't say, 'Oh I messed up, let me do it again.' I did one take and that was it."

Live, do you play percussion or kit?

"Most of the time I play timbales and sing. Whenever I can have a second drum kit then I'll play, because I like playing drums but it depends if there is a backline with the sizes that I need because I'm really small in comparison with most men that play. My hi-hat is cut shorter because if I put my hi-hat down to the height where I normally play, then the rod is so high that it gets in the way."

How important is having your own label?

"It's been great. I have to say that the first two or three records I did, I had control even though I didn't have my own label. When I did my first record I didn't really go through an A&R person, I just turned in my product, done. Now this is different. Having my own label, it takes a team and a village to put things together. Everyone has been a part of this."

Sheila E plays Under The Bridge, London on 23 November.