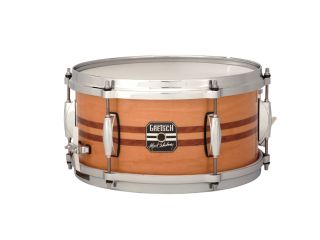 NAMM 2011 PRESS RELEASE: Gretsch has teamed up with Mark Schulman to launch two new Full Range snare drums for 2011. Available 12x6" and 13x6", these signature snare drums are designed to appeal to the working drummer.

Mark's versatility as a drummer has enabled him to create a wide range of performing credentials. Among his highlights are tours and/or recordings with Cher, P!NK, Velvet Revolver, Stevie Nicks, Sheryl Crow, Foreigner, Billy Idol and Stevie Nicks.

With 125 years of fine hand-craftsmanship under their belt, Gretsch Drums is one of the oldest operating drum companies in the United States. World renowned for "That Great Gretsch Sound" and a meticulous commitment to quality, the company produces drums for all levels of players, from the beginning drummer to the discriminating professional. In 2000, Gretsch entered an exclusive worldwide distribution partnership with KMC Music, Inc., paving the way for the company to increase their distribution reach and expand their product offering to include Gretsch products for any level of player.