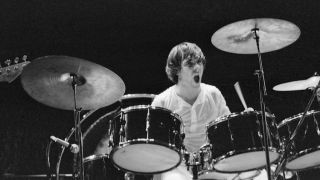 Three years before Moon's tragic passing, journalist Steven Rosen was given a glimpse into Moonie's crazy world. As the anniversary of Keith's death once again comes into sight, and in order to tell some of the fascinating tales Moon had to tell, we have picked out some extracts from Steven's interview (which was printed in full in the May 2009 issue of Rhythm).

It all started with the screeching of Moonie's Porsche...

Moon had rented a home up in Coldwater Canyon and I scanned the addresses, found his, and turned onto an elevated driveway. I pulled in, took a deep breath, and exited the car. The house appeared vacant and approaching the front door, I sensed that it had been left slightly ajar. It was.

I knocked gently. No response. I tried again, a bit more forcefully this time, and still no Moon. Several minutes passed and I began to think that Keith had blown me off or that there were simply confused instructions.

I finally relented and began the long walk back to my car, when I heard the high rpm rev of an obviously finely-tuned machine. I gazed down the street and watched in combined horror and fascination as a Porsche screamed up the road, made the left turn into the driveway, and came to a screeching halt a few feet in front of me. The car was parked on the front lawn. Out came a visibly drunk Keith Moon with a drink in his hand. He walked up to me, extended the arms and cocktail, and announced: "Hi, I'm Keith."

If we travel back to the pre-Who days, can you remember what that period was like?

"I was as crazy then as I am now. Playing with The Who hasn't made me crazier. I've stayed pretty much the same. My earliest memories are playing with a college band; I was still as crazy as I am now. I played with a marching band. I played bugle with the sea scouts.

"I played trumpet. Then I found a use for my mouth (laughs) as I came to puberty other than blowing the trumpet. I had to do something with my hands and I took up drumming.

"I was playing surf music when everybody else was playing Bo Diddley and Chuck Berry in England - they were being subjected to all American rock 'n' roll not West Coast music or surfing music.

"I listened to one or two tracks from The Beach Boys albums, Dick Dale, The Rip Chords, and I liked that. I used to have a guy that imported all that stuff for me. I was pretty much an odd man out."

How did you first meet The Who?

"It was in a pub in England. Their drummer had left and they were making do with a stand-in. I thought, they need a drummer and I'm a drummer. I was working with another band in the same agency as them.

"The agency phoned me up and said, "Keith, one of our top groups has lost its drummer. It's about time you moved up in the ranks. So why don't you come down to this pub and see the band work." So I did. and I've been there ever since."

Did you have much input in the band's personal policy in the early days?

"The one thing that was always encouraged in this band and still is. 'What do you think really?' They'll say, 'Come on Keith, what do you really think?' If I didn't say how I felt I'd be shouted down.

"The same goes for any of us, we give out thousands of suggestions and we take everything into consideration. There is no worry that we won't listen to each other, listen to what we have to say. Pete respects me and I respect Pete.

"The band as a whole respects each other because we say what we think. If we didn't we wouldn't respect each other but we do. If Pete comes up with a song and Roger says, 'I don't think it's right for the band' then we'll try it and if it doesn't work, it's not right.

"The thing is, bands let ego get in the way. They start to take it personally, 'You don't want to do my song, eh? I spent all that time writing the song and now you say it's no good,' and they get angry with the members of the band. But that never happens with us.

How would Pete teach the band a new song?

"Pete would come in with an idea on tape and we'd sit down and listen to the tapes. Listen to Pete's dub and we work from there."

Were there ever songs that were done in the studio spontaneously?

"Everything we do in the studio is spontaneous. We don't rehearse. I mean I've never heard the tapes before. But we just get up and play."

Do you recall The Who's first US tour?

"Not very well. It's a long time ago, it's about eight years. I remember Monterey. It was great.

The smashing of instruments, did it grow out of frustration or was it planned?

Do you think Tommy was the turning point for the band?

"Yes, it was the turning point. To me it was what the band was into anyway; it was just another stage of the band. To me I wouldn't have joined the band unless I'd thought they were magnificent and the best band that I could work with. I wouldn't have been in the band otherwise.

"If I thought it was a good group I'd do my best to play with them. It was no surprise to me that we'd come up with something incredible because I knew what the band was capable of. Nothing that comes out of this band surprises me. This band in itself to me is a constant surprise. The fact that we're still together is a surprise."