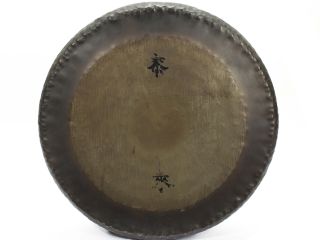 Somebody is having a very expensive 'gong show' (Image credit: Bonhams & Butterfields)

The gong that once belonged to Led Zeppelin drummer John Bonham has been sold for over $64,000 to an anonymous buyer.

LedZeppelinNews.com reports that the gong was consigned by the late drummer's sister, singer Deborah Bonham, and their mother, Joan Bonham. The instrument which was used by Bonham onstage was purchased on 6 July by a buyer during an 'after-sale' when the gong failed to sell as part of Bonhams and Butterfields Entertainment Memorabilia auction.

Originally it was thought that the gong would fetch as much as $120,000, but the final going price was $64,660. Hey - times are tough, even for well-heeled music collectors.

The gong itself is made of hammered brass with two painted Chinese characters to the front, top of rim with two suspension holes. It measures 75.5cm (29¾in) diameter.

Blame it on Vanilla Fudge

Bonham's use of the gong was inspired by Carmine Apppice, drummer for Vanilla Fudge, whom Led Zeppelin supported during their first US concerts in December 1968.

In his book, A Thunder Of Drums, Bonham's former drum tech Jeff Ocheltree, recalled that "John knew how to 'warm up' the gong with a mallet - and he used it for definite dynamic effect in a couple of tunes, not just for bashing....'"

Check out the late, great John Bonham working the gong in this portion of his famous Moby Dick solo.

Liked this? Now read: The top 10 stompboxes we can't live without and 12 best amps for heavy metal