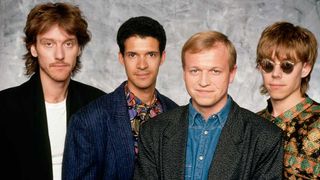 Phil Gould was the man who laid down the tight grooves in support of Mark King's slap-bass led jazz-funk popsters Level 42 in their '80s heyday. We asked Phil just what groove means to him, how to have good time in your playing, and to list his favourite groove drummers.

How do you define groove?

"For me, groove is that place in the music where all the musicians are in sync with one another, and the music has a constancy, often called the 'pocket' (ie, the beat placement remains constant either ahead, on top of or behind the beat). It rarely works if the bass player is ahead and the drummer is behind, although there are times when it can work - the Rolling Stones being one!

"Sometimes, a tension between two different feels can create amazing feel, and a very deep groove, such as in early rock'n'roll, where the drummers were still swinging while the guitarists were trying to straighten things out (eg, Chuck Berry's Roll Over Beethoven). It's the same, more recently, in some of the things D'Angelo has done, although this was more a conscious collective decision.

"But how musicians groove is a many splendoured thing, and how musicians arrive at a certain place in time is. as a result (as steve Gadd once put it) of a 'negotiation' between the musicians, which reflects many things other than just the music, including the culture, the climate, the instruments played, technical proficiency, etc. Sonny Payne grooves with Basie, Ringo with The Beatles, John Bonham with Led Zep, Harvey Mason with Herbie Hancock, Questlove with The Roots, Steve Jordan with John Mayer, etc."

Can groove be taught or is it something that is naturally born into just a handful of gifted drummers?

"I remember touring in the '80s and listening to musicians in Germany or Italy playing their versions of American music (funk, R&B, jazz, rock'n'oll, etc) and being struck by how stiff things could be. Now, if you go around Europe you hear great grooves all over. Feel has become universal, so I guess it has been learned over the years, and people have grown up with this concept.

"I often think of my generation of young British kids as being the first in the UK to be truly funky, in that we'd grown up with James Brown, Sly and Stevie. It was part of our 'heritage'. It can be taught, but, to be truly in time, you have to understand the concept of giving each note its proper value (ie, its full length.

"I learned a lot about note values from studying classical percussion. The difference between percussion and other instruments is that, by and large, you can hold a note for its full duration on a guitar, saxophone or a violin, but you can't do that on a snare drum, or a xylophone, but you still have to give each note its full value.

"This is something you can learn but you must be able to grasp the concept of musical time to make it work, and that comes down to basic musical talent. If you play a drum pattern and are constantly coming in early on the downbeat or varying where you place the backbeat you're not going to make the musicians around you feel good, and you're likely to get kicked out of the band at some point (see Pete Best)."

Are there key techniques, such as leaving space or incorporating ghost notes, that can make a beat groove, or do you believe it all comes down to feel?

"A lot of drummers, when asked to play funk, start to get really busy, as if constant ghost notes and kick pushes are what makes a drummer funky. The opposite is usually true. As in most kinds of dance music, less is usually more. Sometimes the music requires drama from the drummer, lots of fills and shuffling snare work, but it's all about the context. In Level 42 I had to leave even more space as the bass player was exceptionally busy, but that led to way of playing that suited the music."

Who is your favourite groove drummer of all time?

"Depends on the music but I'm a massive Harvey Mason fan. When I heard how Harvey played behind George Benson's solo on Masquerade, from the album Breezin', my head nearly exploded! I knew then that I wanted to play with that kind of minimalism!"

Which of your own recorded grooves do you think encapsulates your definition of what groove is, and why?

"Tricky this. I'm not sure really. Level 42 were such a busy band, it could be a bit full on. I guess Hot Water, World Machine (Live At Wembley) hit that particular nail on the head. Maybe Turn It On, Starchild, Dune Tune from the first album. I think Hot Water might be the best example as the drum part was a direct response to the bassline, and that comes back to idea of there being a 'negotiation'."

Which one groove recorded by another drummer do you think encapsulates your definition of what groove is?

"The Ghetto from Donny Hathaway Live. A groove masterclass from a 16-year-old Freddie White, who just lays it down, no frills, with the deepest of pockets alongside the great Willie Weeks on bass, one of the all-time masters of beat placement."

Find out who topped our Greatest Ever Groove Drummers poll, then read more on groove from JR Robinson, Dave Garibaldi, Steve White, Zigaboo Modeliste, Dennis Chambers and more in the November issue of Rhythm, available now!