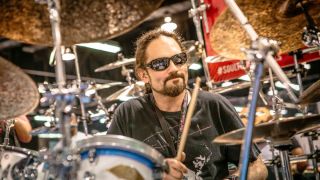 The rock community has been paying tribute to Nick Menza, the former Megadeth drummer who died on Saturday. Reports indicate that Menza, who was 51, suffered a heart attack while performing with his band Ohm and couldn't be revived.

Menza played with Megadeth at their commercial peak, recording four albums with the band between 1990 and 1997 (Rust in Peace, Countdown to Extinction, Youthanasia and Cryptic Writings). There was also a short-lived reunion attempt in 2004.

Read on for a selection of the tributes that have been paid to Menza on social media, starting with those from former Megadeth bandmates Dave Mustaine, David Ellefson and Marty Friedman.

Dave Mustaine: "I woke up this morning to a text message from my son, with the news of Nick Menza's passing. Shocked, devastated, and saddened don't begin to describe my feelings.

"Originally a tech for the band, Nick soon displayed such talent and personality, it didn't take long for us to realize he belonged on stage with us, behind the kit. We asked Nick to join Megadeth as our drummer in 1989. At the time, the band already had its first platinum album, which only served to stoke the fire. We all wanted world domination — with so much of our lives and dreams ahead of us. As we navigated through the pitfalls of life and the music business, our first album with Nick, 'Rust in Peace,' and subsequent albums 'Countdown to Extinction' and 'Youthanasia,' kept up the momentum. We parted ways after 'Cryptic Writings.' We, like all brothers, would disagree at times, but our bond was strong throughout.

"As a player, Nick had a very powerful jazzy flair, unpredictable and always entertaining, And as great a drummer as he was, the time spent with him as a person, a bandmate, and a friend was even more fun. There were several times we discussed him coming back to the band, but for various reasons it never came together. We've been in touch all along, he had come out to our shows recently, and he had remained a great friend, a true professional and a larger than life personality.

The Megadeth family take care of each other, and expect to hear soon about an initiative to help Nick's children. All of us in this community are connected, take care of yourself and your loved ones.

"My deepest condolences go out to Nick's family."

David Ellefson: "Condolences to the Nick Menza family and friends. We have lost a gentle giant... A true artist and friend to us all. #ripnickmenza"

Marty Friedman: "We all know the great and unique drummer that Nick Menza was, but he was also a trustworthy friend, a hilarious bandmate, as well as a very loving dad. I'm beyond sad, did not see this coming at all. RIP Brother."

Dave Lombardo: "Shocked and deeply saddened to hear of the passing of #NickMenza. My condolences to his family. #RIPNickMenza @MenzaNick"

Carmen Appice: "Very sad to hear Nick Menza passed away last night. Wow, another friend gone... Rest In Peace my drumming buddy. He was a really nice guy!!! How many more we gonna lose this year. Nick was 51 years young!!"

Frank Bello: "RIP Nick Menza - so sorry to hear about this..."

Chris Poland: "There are no words... just to describe what a great guy he was, let alone his creative ability and amazing talent. Not enough words to describe. Just devastated right now."

Kiko Loureiro: "I'm sure his legacy will keep inspiring us and the next generations. An amazing drummer, a true musician... Rest in Peace, Nick!"

Charlie Benante: "I remember the fun and comradery - sad to hear of one of our comrades has left us."

Steve Lukather: "Really sorry to hear of Nick Menza's passing. We met when Megadeth was rehearsing next door to us in 1990. Great drummer/ great guy..."

Gus G: "#RIPNickMenza sad to hear about Nick's passing. I love the Megadeth records he played on."