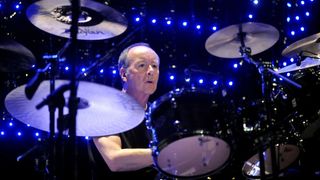 In their 12-year recording career, Thin Lizzy put out 12 albums and a slew of killer singles. Don't Believe A Word, taken from 1976's Johnny The Fox, is without doubt a definitive track, even by Lizzy's sky-high standards. Here drummer Brian Downey recalls the writing and recording of this grade A classic.

What are your memories of the track?

"It was one of those that was knocking around for a few months. Originally it was a slow kind of thing, close to a blues. I remember saying to Phil [Lynott, vocalist, bassist] it would be nice to play with a shuffle beat. I think Robbo [Brian Robertson, guitarist] said to me one day before Phil arrived to try upping the tempo. While we were playing it the engineer recorded some of it and we played it to Phil as he arrived and he thought it was ok!"

Did it come together quickly after that breakthrough?

"It did. It had been in my mind for a few weeks that that should happen. We felt the song was good but it didn't have that quality to make it a hit. We thought we'd keep some of the slow version and after a couple of verses go into the fast version. We released the single just as the fast version and it did quite well in the charts. It became one of our hugely popular hits."

Do you remember the kit you used?

"It was a Rogers. The old silver Rogers kit I had. It was two 24" bass drums with all of the hanging toms, none of which I used on the song! I kept it as simple as possible. There is some tom work in there but I kept it basic."

Did you realise it would be a hit?

"At the time we were really on the crest of a wave. Everybody said anything Lizzy touched turned to gold. I never believe what people say about us, but there were a couple of interviews at the time saying we were the best live band in the UK and things like that so we were confident the song would make the charts. We had lots of time in the studio as well. The days were gone of us watching the clock, we had plenty of time to get a quality sound. We had more confidence as well. It's easier in the studio when you're not watching the clock and you can actually enjoy it."

What were your first impressions on hearing it back?

"I remember listening back and saying that was what we all had in our minds. I knew the drumming would be fairly straightforward and it had hit single material. We didn't want to overplay too much. It was one of those tracks that you knew was radio friendly so you keep it nice and simple, close to the bone."